In the 1950s, Heather McGhee explains in The Sum of Us, most white Americans expected the government to play a central, dynamic role in the economy. In fact, sixty-five percent of white people agreed in a national survey that “the government ought to guarantee a job to anyone who wanted one and to provide a minimum standard of living” (28). Support for that point of view plummeted in the mid-1960s, however, after white Americans witnessed the early years of the Civil Rights Movement, the enactment of the Civil Rights Act of 1964, and the introduction of President Lyndon Johnson’s Great Society domestic agenda. Once federal judges and other government officials made it clear that the term “the American public” includes people of color, in other words, millions of white Americans changed their minds. They insisted that taxes were too high, concluded that most government programs are inefficient and wasteful, and adopted the talking point (repeated incessantly by conservative broadcasters and politicians) that any federal program intended to help middle-class, blue-collar, and impoverished citizens get ahead amounts to socialism.

Since that time, most white Americans have come to believe that the economy is a “zero-sum” equation: all progress for people of color must come at the expense of white people. On the one hand, McGhee observes, the zero-sum fallacy has achieved its intended result: it has inflicted significant damage on people of color. They have been “disproportionately ill served . . . When our government made bad economic decisions for everyone, the results were even worse for people already saddled with discrimination and disadvantage” (xii). On the other hand, economic policy based on the zero-sum view has led to some unintended consequences. In particular, most of the Americans hurt by those “bad economic decisions” have been white: “[D]id white people win? No, for the most part they lost right along with the rest of us. Racism got in the way of all of us having nice things” (xix). Corporations and the “top 1 percent” have profited enormously from the myth that social programs cause people of color to win and white Americans to lose. The numbers are staggering: “[T]he 350 biggest corporations pay their CEOs 278 times what they pay their average workers, up from a 58-to-1 ratio in 1989, and nearly two dozen companies have CEO-to-worker pay gaps of over 1,000 to 1. The richest 1 percent own as much wealth as the entire middle class” (4-5). For middle-class and working people (regardless of race), by contrast, wages have stagnated and upward social mobility, “the very essence of the American idea” (4), has become elusive.

Drawing on history, statistics, her experiences as a lawyer and a public interest advocate, and interviews with struggling Americans scattered from Maine to California, McGhee provides manifold examples of the ways virtually allAmericans have paid a heavy price for economic policies grounded in systemic racism. Millions of white Americans lost jobs, retirement savings, and the equity in their homes during the mortgage crisis of 2008, largely because lenders had spent the previous decade marketing risky subprime mortgages to people of color. Having perfected their sales pitches in predominately Black and Latino neighborhoods, the banks turned their attention to white homeowners with brutal efficiency. People of color, McGhee argues, were the canaries in the coal mine, but their suffering went ignored by most white Americans, who then paid exorbitantly for their indifference. Since President Barack Obama’s election in 2008, Republican legislatures in Florida, Ohio, and other swing states have deployed a host of voter suppression strategies, but many white voters have been disenfranchised in the process: “These policies were targeted primarily to disadvantage people of color, but such broad brooms have swept large numbers of white people into the democratic margins as well” (149). In 2015, for example, McGhee spoke with Larry Harmon, a white Ohioan whose voting rights had vanished as a result of his state’s “purge” of registered voters in its most populous counties: “You know, I pay my taxes every year, and I pay my property taxes, and I register my car. So, the state had to know I’m still a voter. Why should we fight for the country if they’re gonna be taking away my rights? I mean, I’m a veteran, my father’s a veteran, my grandfather’s a veteran. Now they aren’t giving me my right to vote, the most fundamental right I have?” (152).

American cities routinely place sources of air pollution--landfills, incinerators, hazardous waste facilities, etc.--in Black and Latino neighborhoods. That has increased rates of cancer, heart disease, and asthma in those neighborhoods, to be sure, but affluent citizens in nearby predominately white neighborhoods have learned the hard way that they are “still living under the same sky. . . . Environmental racism, in other words, was bad for better-off white people, too” (213). In the early decades of the 1900s, American cities and towns constructed more than two thousand public swimming pools, but when federal courts began to rule that segregation in public spaces is unconstitutional, most of those pools were closed, eliminating facilities that white citizens had enjoyed for years. In Montgomery, Alabama (to cite one particularly extreme example) the city council was so outraged by a 1959 order to desegregate a public pool that it abolished its Parks Department altogether: “The council decided to drain the pool rather than share it with their Black neighbors. Of course, the decision meant that white families lost a public resource as well. . . . Uncomprehending white children cried as the city contractors poured cement into the pool, paved it over, and seeded it with grass that was green by the time summer came along again. To defy desegregation, Montgomery would go on to close every single public park and padlock the doors of the community center. It even sold off the animals in the zoo. The entire public park system would stay closed for over a decade” (25). New Orleans, St. Louis, and many other cities also drained their public pools, requiring all citizens fond of swimming to build pools of their own or join private swim clubs. What had been a treasured public resource had, for no reason other than racism, become a “luxury amenity” for everyone (28). Another example of a resource that used to be publicly funded but has become an expensive “amenity” is the public university. In the 1970s, when the vast majority of students at public institutions were white, McGhee points out,

[S]tate governments provided six out of every ten dollars of the cost of students attending public colleges. The remainder translated into modest tuition bills--just $617 at a four-year college in 1976 . . . Many of the country’s biggest and most respected public colleges were tuition-free, from the City University of New York to the University of California system. . . . When the public meant “white,” public colleges thrived. . . . That’s no longer the case. Students of color comprised just one in six public college students in 1980, but they now make up over four in ten. Over this period of growth among students of color, ensuring college affordability fell out of favor with lawmakers. . . . The average public college tuition has nearly tripled since 1991, helping bring its counterpart, skyrocketing student debt, to the level of $1.5 trillion in 2020 (41-42).

Throughout The Sum of Us, McGhee tells a story that should elicit anger and shame. She demonstrates that when the primary goal of social programs was “to build a white middle class,” most white Americans enthusiastically supported that type of government spending. As soon as they realized that the beneficiaries of public funding would include “a future middle class that would be majority people of color” (xv), however, they changed their tune. Instead of stressing the injustice of that shift, McGhee frames her analysis in terms of rational economic self-interest. In the end, The Sum of Us boils down to one practical question: How much longer are most white Americans going to accept the toxic--and, in many ways, self-destructive--myth that they “lose” when social programs provide benefits for all American citizens? 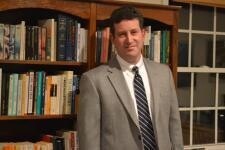 Alex Pitofsky joined the ASU English faculty in 2001. His scholarship, which usually focuses on the novel and on British literature, law, and history in the Restoration and the 18th century, has appeared in Studies in Eighteenth-Century Culture, Eighteenth Century Life, Postmodern Culture, Twentieth Century Literature, The Mark Twain Annual, Studies in American Culture, and other publications.