When the Sun Set

When the man pulled up to Norma’s property, her Great Pyrenees Dolores began to bellow. She’d been asleep beside the barn, beneath an overhang of metal roofing. The bellow was not aggressive, but nostalgic, as if she were calling for something lost. From her kitchen window, Norma saw the truck heading toward her, carrying the load of wood she’d ordered, auburn like her hair before it went gray. That morning, the man on her radio had said, “Go as far below ground as possible,” and when she turned, her foot kicked the shriveled body of a dead mouse. It slid past her, but she didn’t notice, as if she’d been preparing for this her whole life. She remembered looking out at her schoolmates’ faces from beneath her own desk during the drills that became routine. But this time is worse than then, she thought—then at least you knew who your friends were, where you belonged.

“Your bitch comes onto my property—comes near my hens one more time, and I swear I’ll shoot her,” she’d wanted to say to her own neighbor. Of course, she was not the kind to use that language. But more than once she’d thought about knocking on that woman’s door—which had been painted a ridiculous purple—and explaining a thing or two about peace. Maybe she’d even pluck that “PEACE” sign out from her front yard, crack it open with her knee. “Your dog is terrorizing my chickens. Chases and chases them till they can’t stand it any longer!” she would say. She could swear one of her chickens had died from exhaustion, having run so fast from that Pit. Thought about sitting that young woman down, telling her about the heroes who afforded her the freedom to have such a sign by her door.

Since Norma’s son had died—almost a year before when a storage tank exploded at the gas plant where he’d worked—she found once beautiful things, like the silent image of antelope flying by with the shadow of pale purple mountains just behind them, alarming. Lately, each night at dusk when she heard the coyote cackling, she felt an acute fear, as if they were almost certainly laughing at her. Now there was talk about nuclear war, about missiles, and whenever she heard the sharp hum of a plane overhead—they seemed to be flying lower and lower—she felt suddenly alive, suddenly alone.

Her animals, too, had begun to betray her. Just a few days before she’d found her milking goat, who’d been missing for a week, down by the small lake—found it staring at a mountain lion, straight into its yellow eyes. As if it were daring the cat. Come and get me. The only way the goat could’ve escaped was if someone had left the gate open. Had she left her gate open? No, she’d been sure it was someone else, maybe the mailman or the old guy at the gas station who was always asking her if she was scared out on the farm by herself. Maybe he’d come onto her property, watched her go about her day while hiding behind the barn, or maybe her son’s trailer, which she refused to step into. Norma had once felt clear about who her enemies were, but now she did not know whom or what she could trust.

The last time she left her house, weeks before—she’d needed alfalfa and chicken feed—she’d planned to say something to her neighbor on her way home. That afternoon she’d been face to face with that Pit, its big mouth smiling as if it wanted her, wanted to eat her whole. May, Norma’s other Great Pyrenees, had come running as if from out of the clouds, as if from heaven, and chased that Pit back to its side of the fence. Norma had wanted to make a few things clear to that young woman. She had slowed to a stop, her truck vibrating on the dirt road in front of the woman’s drive, which was bordered by tall sunflowers with loose necks. She could hear a wind chime but could not locate it, heard the quick whistle of the Meadowlark. From the safety of her truck, she looked more closely at that sign that read “Peace,” closer and longer than before, at each letter of it, trying to see it as a word, to remember what it meant.

Out the large bay window, Norma watched Dolores chase the truck to the front of the house. Usually slow-moving, she appeared to want to tell the truck driver something. Norma found herself running outside after Dolores, as if the dog might expose her—or worse, try to leave with him. The wind whipped at her. She ducked, hid her face with her arm. The fence of tiny American flags which she’d placed around her property undulated with the wind, flickering reds and blues. Once golden, feather-soft with sage, the grass cracked beneath her boots. A magpie landed on the fence post that Norma was clinging to. It blinked hard at her as if it knew what she’d done. The firewood slid down the bed of the truck, enough to last her all winter. She considered asking the man for help with something but realized, laughing a little to herself, how dangerous that would be, inviting a strange man into her home. The driver swung the truck around. She didn’t even get to see his face.

Norma watched the man lock the gate behind him and drive off and headed to the barn. In addition to the dogs, there were thirty chickens and four goats. In the barn, the goats looked at her with slanted, black pupils. They were hungry. Their eyes were swollen, and the skin beneath their eyes bloated. For a week now she’d been giving them whatever was left—pockmarked apples, limp carrots. A few of the goats had begun to lose their hair. She wished she could explain to them why she couldn’t leave the farm, but she felt maybe, somewhere deep down, they understood. She placed her palm on a bare patch of skin on her blonde goat and closed her eyes. When she opened them, there were mice everywhere, dripping down the walls from the wood beams of the barn roof, slipping into holes in the ground, burrowing into what was left of the chicken feed. They were in her house too. Even though she could not always see them, she could hear them, especially at night when she lay looking up at the ceiling, a stranger in her home of thirty-seven years. She’d taken to wearing earplugs at night. She’d even begun inviting Dolores to sleep inside—“Come inside. It’s cold.”—but Dolores always ignored her. When she opened the door to her house as the sun was just beginning to fall behind her, light spilled across the floor, illuminating the black hole in the ground. She tiptoed around the entrance to the cellar, careful not to touch the shovel which propped the door to it open.

Two weeks before, she’d lifted the door with both hands. She had not opened the cellar door since she’d stacked boxes of her son’s things down there. She’d bent over, took hold of the latch. She’d held her breath—the mice had burrowed into her son’s flannels—and lifted the door higher. Norma considered herself a strong seventy-six, in body and spirit. She had not shrunk as most people did as they aged, but as she pulled up on the cellar door, her veins turned blue. If what might happen did happen, she had to be ready. She did not know at the time—she could not have imagined!—that May would fall in there. She had heard May fall into the hole, and when she hurried down, wrapped her arms about May, and pulled up on her body she felt a burn leak from somewhere in her chest. May was limp, though her green-blue eyes were alert, wet and frightened. She had not seen it, but Norma imagined that by the time May had hit the cement floor a cloud of fine dust had embraced her, pluming up about her body. Somewhere, sometime it must have registered with Norma that May was dead. She now grabbed a dog bowl, filled it to the top with cereal, added a bit of water and hesitantly walked back toward the cellar. “May?” she called, taking a step toward it. From where she stood, the cellar seemed to go on forever. She might be able to fit all of the animals down there after all. She walked very slowly down the steps, did all she could to not look at May’s body. May was curled in such a way that suggested she’d meant to hide her face. “Shhh...” Norma said as she placed the bowl down. She dashed back upstairs and outside for some air.

The sky was wide. Blue. She let the light slip down her face. She sat in a cushioned recliner with faded pink fabric. May’s chair. She fell asleep, dreamed about May—May and Dolores as puppies, nothing but cotton balls. She held them to her face. But then she began to choke. It was as if she couldn’t breathe. She called for her son, but her throat was so dry. Something hot grabbed at her feet, and when she looked down, the ground was on fire. The light around her blistered, popped. Heat came upon her like a wave.

When she opened her eyes the sun was setting. A lip of golden light swelled before her. She shielded her face from it. “No!” she said, but the sun bloomed, burst. She shouted, “Dolores!” She fumbled out of the chair, stared at the crescendo of light. “Come on, girl! It’s happening!” But Dolores, her head still against the ground, merely raised her eyebrows. “You’re a fool, then!”

She grabbed at the chickens to save some of them—a few had been flittering about her ankles—but caught only one. She hooked it beneath her arm, pet its underbelly to calm herself. She rushed through the front door; the screen snapped behind her. Thank God she’d had the cellar door open, she thought. But on her way down, one step splintered and broke, the shovel slipped and the cellar door fell, crashed. A boom followed her, and she moaned like she hadn’t done in years, and it felt good. She was hurt, but she was safe, leaning against May, her body—cold, even with all of that fur—which Norma held onto as if May were a stuffed animal, to whom she said, “When you wake, everything will be like it was,” and to the chicken, shivering against her chest, she said, “It’s almost over. It’s almost over.” 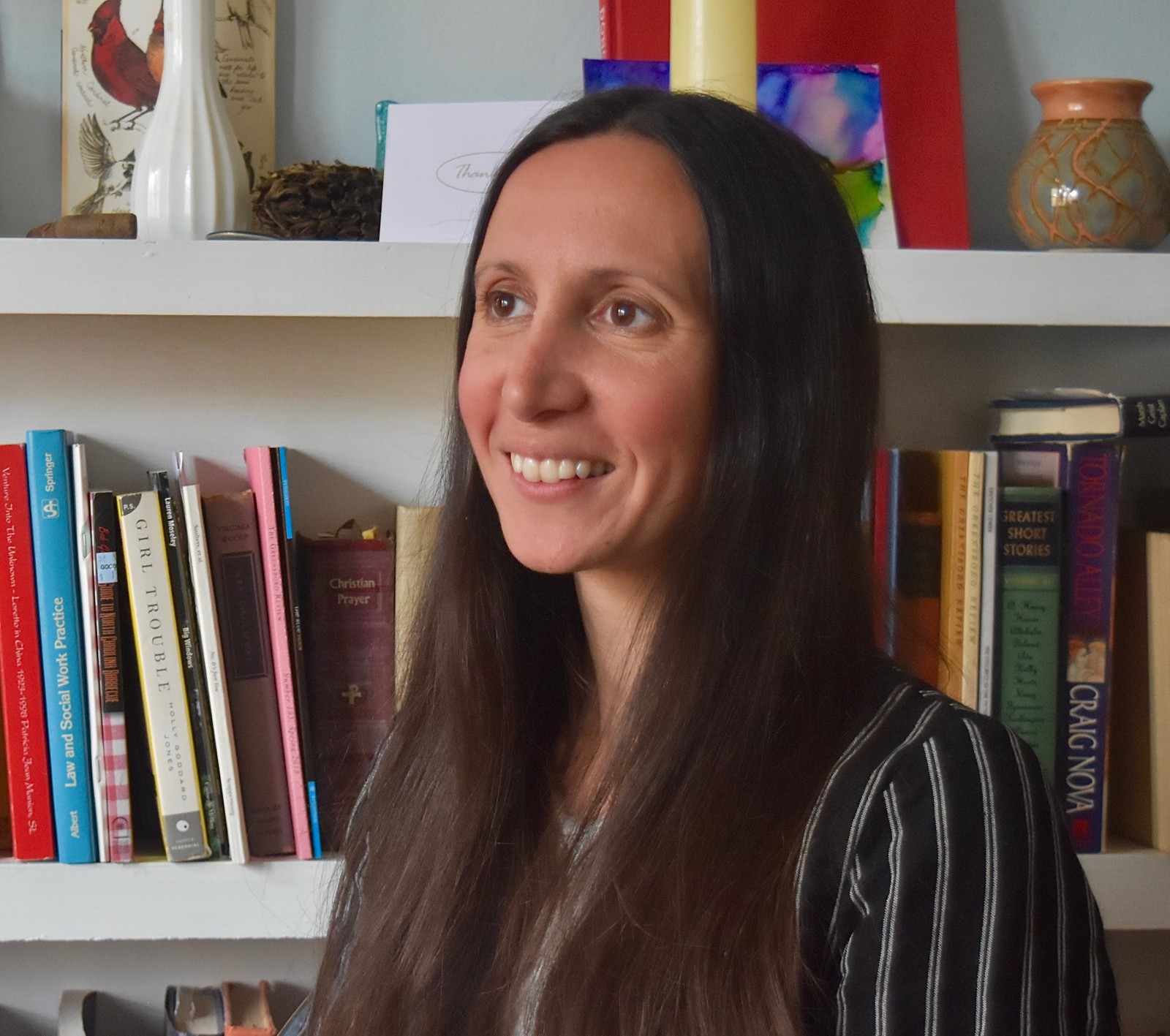 Kris Brunelli is a writer and artist. Her work has appeared in On Being, the Catholic Worker based in NYC, The Passporte, and others. She is a 2019 MFA candidate and teacher at the University of North Carolina at Greensboro. Her visual work can be seen at www.kristenbrunelli.com. She is currently at work on a linked short story collection. She was recently awarded a 2019 Swan Fellowship for an interdisciplinary artist at the Vermont Studio Center. This is her first fiction publication.