The color blue cannot be found, they say,

in most organic pigments.  Birds encrust

with sponge-like keratin their feathers, a trick

to scatter light and cancel all but blue.

their crushed-up scales will make a dusty brown.

When you first lifted up the frames that hid

my eyes, you said you never knew they were

so blue, and yet this wasn’t ever true:

is likely brown as yours, but lies behind

a stroma drained of nearly every kind

of pigment under heaven, clear as water,

filled with little shards that scatter back

some tricky light, another peacock fib

derived from emptiness and waves.

Ben was the one to go down, slipped

like a proboscis under the blue skin of the

big lake, and all unseen his wheaty head

was lost among so many shards of light

dancing over Michigan, wave-crash but

no Ben behind—swirling universe of sand

and pebbles churning, head somewhere some

other part should be, eyes blink see these stars,

opens then because it must, ears full of grumbly

scream and the lifeguard’s whistle and legs

hack up without help but the lifeguard walked

him back anyway, and suntanned Momma

holding him, him crying, him not to swim

never to touch water when yellow flew—and we,

we forgot slowly how to play in that horizonworld,

to splash back that tension line, the two taut blues.

The lake I take you to won’t be the lake

I knew before the baselines shifted, before

leaned one day behind the sinks and gas taps,

that blue horizon that you’ve seen from blufftop

waiting for the fireworks each Fourth?  Do you

remember, boys and girls, when viridescent

stripes ran out along the lighthouse, wrapped

around your legs when wading too far out,

the gentle curling of that life, when fish

washed up in summers gape-eyed by

the scores and all the world smelled like lakeside?

The sand would carry fewer gashers then,

but some year soon those shells will vanish too,

with tokens of insatiability,

mussels made to swallow what they’ve found

in tangles thick throughout our sweetwater sea.

Do you enjoy that photogenic blue?

The waves that whisper every break their death?

two turns of century ago, wrote

about the bluff we stand on now.  Its name

was Ishpeming, the place where Kija Manito,

that Great Spirit, chose to set his throne,

from where we know he ambled north

at night, the stars alight in Tchibekana,

the Galaxy on High, scattering the land

with seven billion stones of every color,

shape, and size.  “No such charming stones,

excepting those, could anywhere be found

around all the shores of the Great Lake.”

He later planted flowers in the forests,

one by one, and then returned to work

the great conceptions of his soul, kitchichang,

along the dune of Ishpeming.  He built

a bow at least two arrow flights in length,

his mitigwa, and laid it gently out

along the bluff, where he began to paint it.

Far behind him, from the setting sun

a cyclone dropped and swept across the lake,

the rolling waves, reaching then the shore

dunes slumped against the bow (the bluff

we know), and Kija Manito smiled in the teeth

of the storm.  When it retreated to the darkened

east, between its lingering shade and what

a tearing squall to lift the painted bow

and it ascended to the place between

the clouds and twilight, arrowless and empty,

no string or quiver, tips in treetop glow,

a bow of peace, he said, as a reminder.²

The lake I take you to won’t be the lake

that swallowed Ben among a verdant throng,

that Pokagon would dream of seeing lifetimes

hence—Lake Michigan the source of life

and culture, waving on.  This lake is blue

and clear as all unpeopled sky with light,

blue of emptiness, a stroma blue

bereft of pigments that it knew so long—

the Potawatomi received the tale

from the Ottawa, wrote Pokagon,

who had learned it from the Mashkode

whom they had driven from the land one half-

millennium ago.  Much longer still

the lake had worn its algae and its fish,

shell.  The shells themselves are growing sparse

of late, the castles every child today

erects in shade of Ishpeming are barer

than they’ve been.  I don’t know what I want

for you to see; the lake I take you to

in roars of shipwrecking blue; I want for you

to feel the riptide in your calves, the cool

below the fire, to spy the minnows’ trace

of lacework in the shallows, scoop of beetle

back-floating away for you to save to shore

and more of power and of passing grace,

but not to love the blue, my dear, the blue

that hits our pupils rushing fast, that scorns

the fleeing redshift stars, that comes at noon,

the blue that chases faster than retreat

accusing us of our own empty sails,

self-crashing blue that churns the rocks to silt

and brightens every tourist’s photograph,

dark blue that lifts a tourist from the pier

and drowns him every year, that rocks or swathes

each day of death, of surf, of grief, of breath.

¹In just the past twenty years, invasive zebra mussels, carried in by the hulls of boats, have cleared the swampy green-brown of Lake Michigan to a transparent, tropic-seeming blue. With this catastrophic loss of algae and a consequently unraveling ecosystem, the freshwater sea’s total weight in fish has collapsed nearly to what just one species, the alewife (itself imported), represented only ten years ago. Few of us perceive this hugely visible death.
²Chief Simon Pokagon, of the Pokagon Band of Potawatomi, tells this story in his partially bilingual pamphlet Algonquin Legends of South Haven, printed on birch bark in Hartford, Michigan by C. H. Engle, twelve pages with illustrations, 1900. I follow Pokagon’s spellings of Anishinaabemowin words throughout, but I follow more modern practice in omitting syllabic hyphenation. 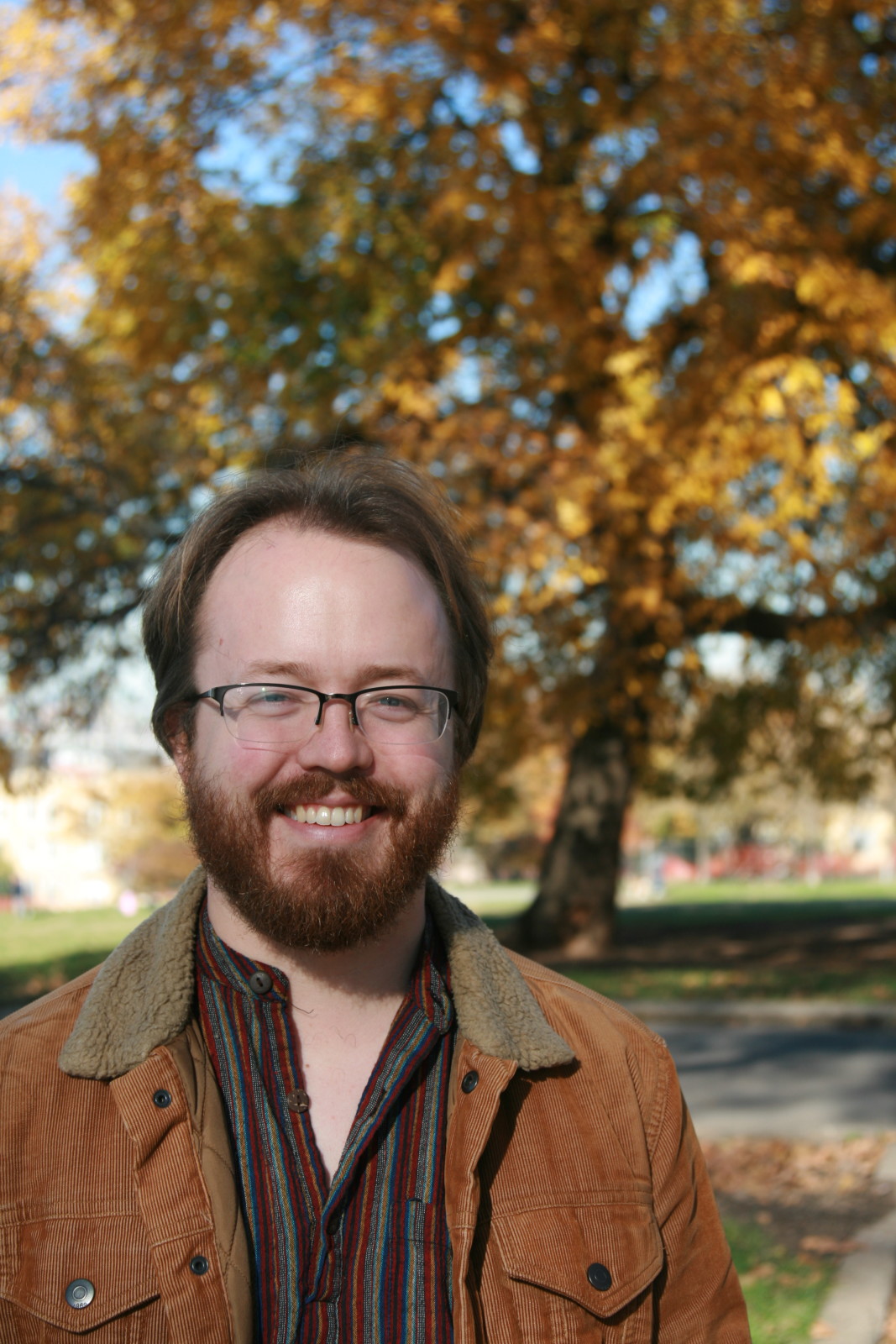 John Linstrom grew up in the small, Rust Belt beach town of South Haven, Michigan. His poems have recently appeared or are forthcoming in Commonweal Magazine, Alluvian, Valparaiso Poetry Review, Bridge Eight, and Dunes Review. In 2015, Counterpoint Press published his centennial edition of Liberty Hyde Bailey’s manifesto of ecological philosophy, The Holy Earth, with a new foreword by Wendell Berry. As co-editor, he now has a new anthology forthcoming from Cornell University Press, The Liberty Hyde Bailey Gardener’s Companion: Essential Writings. He currently lives with his fiancée in Queens, New York, where he is a doctoral candidate in English and American Literature at New York University. He also holds an MFA in Creative Writing and Environment from Iowa State University.