They tread me in waist-high, protective boots, bowing to Linnaeus, naming things binomially, wrapping wire tags etched in carbon, cutting plant flesh with razorblades. Magnolia virginiana. Gordonia lasianthus. Taxodium ascendens. Fingering cypress knees, their eyes follow timbered lines sun high, tongues tasting, noses cocked, sniffing, saliva on the chin. Pulling undergrowth by root hair, they take maidencane and bladderwort, fronds of netted chain. Woodwardia. Carex. Habenaria. Exhibits of heath, sweetspire, myrtle. They cage softshell and yellowbelly, but not Alligator mississippiensis, able to break a neck with the slap of its tail. It is shot between the eyes, skinned for belts and shoes. Claiming dominion, they bring down crane, heron, and egret, while bloodhounds sniff the quiet nests of bitterns, wood ducks, an otter on her young. A grail bird dead in peat is not specimen enough, so they net one live, in a net different from the fishing net piercing the dark face of the water for pickerel, gar, and bowfin. A wild boar is throat-slit and left to rot. They take diamondback, cottonmouth and rattler, a hognose playing dead. Spring peepers and a tree frog call inside a box. Spadefoots and salamanders into lid jars before two bears are shot dead, the sow wide with cub—they cast lots to make a rug. Ursus americanus floridanus. A doe, tender with curled beard and flecked snow tail, comes through the wood, panting after water, the velvet of her nose reaching, her dark eye wide as sky. Odocoileus virginianus. They procure no specimen, but dine on venison steaks; then blood and scraping, the pelt is piled with hides of bear and cat, and beneath the laurels a lone fawn curls in fallen leaves. Homo sapiens. They press kinks from their backs, the joy of the chase, the stories they will tell. 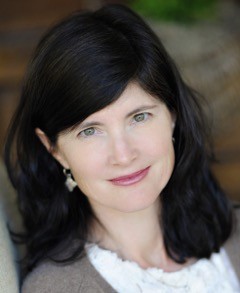 Jude Whelchel spent her childhood in Georgia climbing southern specimen trees. When she came down she pursued academic degrees including an MFA from the Program for Writers at Warren Wilson College. Her fiction has been awarded grants through the North Carolina Regional Arts Commission and the Barbara Deming Memorial Fund and appeared in journals including The Potomac Review, The Thomas Wolfe Review, and The North Carolina Literary Review with a Pushcart nomination. A chapter from her current project (co)won the 2014 Thomas Wolfe Fiction Prize. An Episcopal priest, Jude makes her home with her family in Asheville, North Carolina.