Mothering Bear: Stories Torn from the Archive of American Life

After the mother was killed, the cub was brought out. It was a poor fuzzy thing, weighing not more than a pound. One of the men returned to camp with the cub and dropped it in the snow in front of the kitchen. The little chap was helpless, and there was not a drop of milk in the camp. There never is in the North Woods.

The cook’s wife came out of the cabin and saw the cub there waiting for death. It was such a soft thing and so helpless that she picked it up tenderly. Her mother instinct told her that if the cub was to live, the nourishment would come from but one source. “He shall share with my baby.”

Other pictures show the bear a few weeks later, then a rollicking happy little bear…eating jam. In another picture the bear was kissing the baby girl.

Mr. Underwood added that it shared the crib with the baby when the night got cold.

The cub grew rapidly and one day he scratched the face of the baby and the woman realized the time was at hand for the bear to get a new home, so Mr. Underwood brought him to Boston.

Later Mr. Underwood took the cook to where the 400 pound bear was. “I know him but he doesn’t know me.”

“But wasn’t that a great thing. Just think what our kindness to that little cub has meant to us.”

Authorities warned Mary Musselman, 81, multiple times not to feed the black bears, but she fed them up to 18 bowls of dog food at a time.

She told them she wasn’t going to stop.

A judge sent wildlife commission officers to arrest her, but she fought the commission and said she would kill them.

Then she fed the bears again. 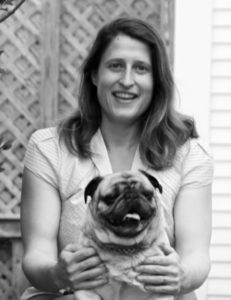 Julia Shipley is the author of a debut collection, The Academy of Hay, winner of the Melissa Lanitis Gregory Poetry Prize and finalist for the 2016 Vermont Book Award. Her work has also appeared in Barrelhouse, Colorado Review, CutBank, FIELD, Orion Magazine, Poetry, Prairie Schooner online, Terrain.org, The Rumpus and Whole Terrain. She lives with her husband and pug in northern Vermont.