“An underground mine fire has been burning [in Centralia, Pennsylvania] for almost two decades. The fire began in an abandoned stripping pit just outside of town in 1962 and quickly spread into a vast network of underground mine tunnels, its poisonous fumes traveling abandoned corridors under the town and forcing residents out of their homes. Initial attempts to smother the fire were inadequate, just as every attempt since then has been.”

Snow settled in Centralia early that year. Snow, layered on earth, layered on fire. Everyone in my town always reacted to winter with indignation, as if they didn’t know it was going to happen again this year, as if they, of all people, could not understand tradition, and that the seasons were merely upholding their own. My eighth grade teacher, Ms. Elliot, told us the story of Persephone and Hades, how Persephone ate four pomegranate seeds in the Underworld after she had been kidnapped, how she then had to return to the Underworld for four months a year because of those four pomegranate seeds she ate, how her goddess mother refused to let anything grow on Earth in those four months she was without her daughter, how those four months became winter. Maybe justifying the barrenness of winter with this story comforted the ancient Greeks, but my town—while it did need comfort—did not need any more stories.

Our story was everywhere; it could not be put out. It was debated in Harrisburg and Washington. It was used as fodder for spooky tales for children in other towns. It was spun by the environmentalists and the miners and the politicians and the conspiracy theorists to be another point chalked up for them and their smoldering agendas. Our story was typed into teleprompters by people who did not know us and read through glossy white teeth that could not belong to us and heard by others who did not care about us. Our story was not our own.

The tension that year over staying or leaving was no less toxic and intangible than the carbon monoxide that was in our town, in our homes, our lungs. The carbon monoxide that my mother tracked on her DEP-issued monitor and showed to my grandmother, as proof that this place was killing us, that we needed to move now. My grandmother would not budge. She scolded my mother, asking how she could turn her back on her town. Both agreed this was a matter of life and death but each thought their choice was the correct one. Their debate was always a burst of intensity with few words, but the unspoken words and stakes were clear to everyone in town, since this was the same debate they had with their neighbors, spouses, selves. The argument was as eternal as the fire itself, and it seemed to have as little hope for ever being extinguished.

But on Valentine’s Day that year, my mother told Gram that enough was enough. One of my classmates had fallen into a pit near the fire and could have died, and my mother said she had her own kids to worry about and wasn’t about to sacrifice us to my grandmother’s stubborn belief that her loyalty to Centralia could resurrect something that had started to die almost twenty years ago. This town was its people, not a place, and the people were leaving, almost all gone, not coming back. Still, my grandmother sat stone-faced on the porch chair as my sister, mother, and I packed the car and drove away.

As we drove down Locust Street, my mother told my sister to quit her blubbering, that New Berlin was only a short drive away from Centralia. I did not cry, but felt a concoction of dread and remorse. They created an urgency, and the urgency flooded my whole body and I shouted STOP so loudly and suddenly my mother almost did for a moment before refusing, not wanting to hear any more excuses, any more debate. I told her I needed to pee—it was such an emergency that it couldn’t wait until New Berlin. Reluctantly, she pulled over at Jim’s convenience store, where most of the grocery shopping happened since the actual grocery store had closed a few years ago. I leapt out and rushed into the store, compelled by the urgency. The clerk, Jim, asked what he could help me with. I just looked around before settling on an apple, which I paid for with the change in my pocket.

Staying out of the line of view of the window, I began to eat the apple, furiously, and Jim just stared. He stared out of curiosity at my strange behavior, but maybe a little because he knew about the fight between my mom and grandmother—of course he knew—and our leaving, and looking at the ash and rubble of other people’s lives always makes one’s own look less sooty. I was now just taking bites and spitting them into the trashcan to get to the core. When I got to it, I picked out a seed with my fingernail, popped it into my mouth and swallowed it. Deciding one seed was enough, I let the apple clunk into the trashcan and left Jim gazing after me as I darted out of the store and toward my mother’s car. 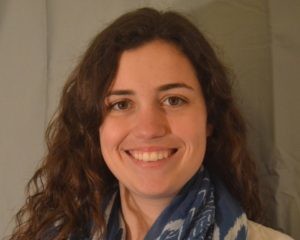 Sarah Small is currently pursuing an MFA in fiction at the University of Alaska Fairbanks, where she is also the Managing Editor of Permafrost Magazine. She is from State College, Pennsylvania and holds a degree in Environmental Studies from Bucknell University.