A Sestina for Traveling Season

Judge’s Comment:
Who can resist a narrative that employs an old, almost mandarin form for its movement?  “A Sestina for Traveling Season” is timely and compassionate, the story of our restless kind struggling and evolving across the ages, as triggered by an airport experience.

A Sestina for Traveling Season

“the same ‘species’ that are nonindigenous, naturalized, or invasive in one
area are native somewhere else”

“we are now part of the way the world is” 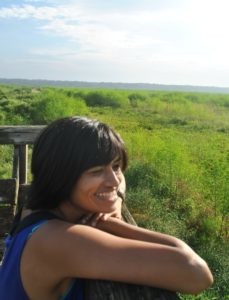 Geetha Iyer received an MFA in Creative Writing & Environment from Iowa State University in 2014. Her fiction and poetry appear in journals including Orion, Gulf Coast, Ninth Letter and the Mid-American Review, among others. Recognition for her work includes the O. Henry Award, the James Wright Poetry Award, the Calvino Prize, and the Gulf Coast Fiction Prize. She was a 2016 writer-in-residence at the Sitka Center for Art and Ecology. She grew up in the United Arab Emirates and presently lives in Panama.