The Other Side of Mourning 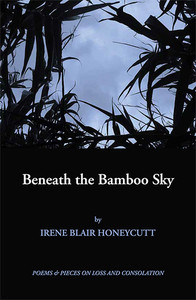 Confessional poetry has been termed the “poetry of personal extremity.” Out of such straits, Irene Blair Honeycutt’s searing new volume of poems, Beneath the Bamboo Sky, issues. Writing these poems, about a string of concentrated, devastating losses, demanded unimaginable courage. Its author peered unflinchingly, near pathologically, interminably into the void, the loaded bore of mortality – and came away whole, transformed.

The book’s temperament is essentially hybrid, a canny assemblage of prose poems, structured formal poems, shape and collage poems, narrative and lyric braided within the same frame, dramatic monologues, untitled marginalia like diary entries, and even family photographs –a foreshortened genealogy, the family album and archive, a catechism, in many ways experimental.

Beneath the Bamboo Sky opens with a preface by Honeycutt, a precis of the withering circumstances that drove her to her knees, but in the bargain also reeled her back to her writing table and the cosmos wrought of raw chaos. I’m tempted to say that, paradoxically, grief served as her Muse. But, in truth, grief as Muse is no paradox at all. An additional Muse, however, working hand in glove with grief, steadily urging Honeycutt toward these poems, is candor – astonishing candor.

In her preface – a kind of prose hybrid of its own – Honeycutt invokes in its very first sentence her therapist, then explains that within a handful of years she endured the loss of her last two brothers – another had died a few years earlier – as well as “several dear friends,” and the death of her forty-three year old nephew. What’s more, Honeycutt herself was faced with a life-threatening medical diagnosis. She goes on to say: “Both my therapist and my oncologist heard and understood my bereavement.” In fact, unlike any book of poems I’ve ever read, one of the back-jacket blurbs – queued up with luminous statements by eminent poets Linda Pastan and Edward Hirsch – is offered by Honeycutt’s oncologist.

In MacBeth, King Duncan’s elder son, Malcolm, proclaims: “Give sorrow words; the grief that does not speak knits up the o-er wrought heart and bids it break.” Empirical scholarship now exists demonstrating that writing about trauma is instrumental in overcoming trauma. Narrative Therapy and Cognitive Processing Therapy are two such strategies that successfully employ writing to harness, often into blazing art, traumatic experiences and memories. Yet how does one go about beating back sorrow while snared in the ongoing immobilizing throes of it?

To slake her grief, Honeycutt turned to ritual. She rang Tibetan bells, “listened to dreams” …[,] “poured out feelings in journals,” and wrote and wrote and wrote, discovering as one does through the actual process of “[giving] sorrow words” a portal into the world on the other side of mourning that sustained and lifted her. Yet that world, she acknowledges in the volume’s final poem, (“The Loss of Siblings Brought a Tsunami of Grief”) “never feels the same.”

This is a tough book – a harrowing personal odyssey meticulously detailed – by turns an exhausting one. But Honeycutt is a sturdy guide and mentor. There’s not a whit of turn-back in her. The risk she takes in these nakedly autobiographical poems is profound. She doesn’t stand shade-like behind a distorting scrim. The speaker is unmistakably the eyewitness author of these poems. Honeycutt permeates her verse. Through an act of will she inhabits them, parts the curtain and steps on stage to announce herself – without pretense or sentimentality, without the comforting artifice of a poetic “speaker,” but rather with clear-eyed language and the practiced polyphonous voice of the poet, Irene Blair Honeycutt. It’s important to stress again and again how brave this book is.

In the remarkable long poem, “My Woodstock,” the poet returns to the home of her youth in Jacksonville, Florida, “searching for [her] childhood,” acknowledging that “Even / neighborhoods lose their way.” For a moment, the poet is displaced by her own nostalgic reverie, an amnesiac moment where past and present conflate and she is stranded in an interstice, a liminal space, wholly otherworldly as she stares at the “house on Lowell,” “Nailed to the front door, a sign: / No Trespassing.”  She wonders if “some of [her] things are still inside” as she wanders “ … the yard / where [her] brothers and [she] played with friends and swung / on tires tied to ropes looped around branches of gigantic / oaks.”

The poem goes on in this vein, cataloguing the locus of her childhood, brought alive for a moment in her hallucinatory state. She allows the past to seduce her because, more than anything, it resurrects all that has vanished, including most importantly her lost brothers. Beautifully, strategically, and directly on the heels of these essential, but disorienting moments, Honeycutt pays homage to the natural world. “Wind [bending] the bamboo reeds” is the music not only of her childhood, but of the present, and it brings her back to consciousness. Everything is gone, boarded, shrunken, even “the bullfrogs and / the quail in the woods where [she and her brothers] built huts out of palm and / bamboo.” “The chinaberry tree [she] climbed / … has been cut down.” Yet the solace of the natural world, perhaps this book’s controlling metaphor, endures and offers solace.

The poem is structured in a series of packed, discursive prose stanzas, punctuated by spates of traditionally lined stanzas in which Honeycutt moves in and out of formal structures, in and out of realism and impressionism, spinning disjunctive clips of her childhood. Her penchant for rhyme and off-rhyme is precocious. It sets up a wonderfully concrete visual tension, nearly filmic, between the more static, narrative stanzas and the looser-gaited airy interludes where words are parsed out, sewn like seeds among the white space. And the sonic integrity, in each of these poems, is abundantly apparent.

At 115 pages, this is quite literally a dense book of poetry, perhaps even ponderous, given the gravity of its subject matter. It could be argued that the weight is too much to bear, but make no mistake: Honeycutt knew all along that she was writing a Requiem that required the vestments of sorrow. She privileged risk and ritual truth over refuge, a voice triumphant in its ceremonial grief.


Joseph Bathanti is former Poet Laureate of North Carolina (2012-14) and recipient of the 2016 North Carolina Award in Literature. He is the author of ten books of poetry, including Concertina (Mercer University Press, 2014), winner of the 2014 Roanoke Chowan Prize; and, his most recent volume, The 13th Sunday after Pentecost (LSU Press, 2016). He is the author of four books of fiction, including The Life of the World to Come (University of South Carolina Press, 2014), and two books of nonfiction. Bathanti teaches at Appalachian State University in Boone, NC, where he also serves as the University’s Watauga Residential College Writer-in-Residence.