Echoing the Fragility of the Planet: A Conversation with Susan Ludvigson

During the fall semester of 2017, poet and professor emeritus of Winthrop University, Susan Ludvigson, held the Rachel Rivers-Coffey Distinguished Professorship in creative writing at ASU, where she taught advanced creative writing students and presented a craft talk and reading. The author of nine volumes of poetry, most recently Escaping the House of Certainty (LSU), Ludvigson has also received many awards for her work, including grants from the National Endowment of the Arts, the Fulbright Foundation, the Guggenheim Foundation, and the Rockefeller Foundation. Known for the psychological complexity and depth of her poems as well as her joyful explorations of love and sexuality, Ludvigson has generously supported and mentored a new generation of writers. I spoke with her after her craft talk on voice in mid-October, and we discussed, among other things, the trio of poems inspired by other animals in the Spring 2016 issue of CMR. As a former student of Susan’s, I’ve been inspired by her fascination with the creative process and the sources of poetry, so that’s where we began.

Kathryn Kirkpatrick: Susan, your poems make such rich use of your dream life, and include so many wonderful dreamscapes. How do you think about the role of dreams in your poetry?

Susan Ludvigson: I can say that for a long time I have worked out of dreams. Not so much right now—because I’m not remembering them as much as I used to—but I have had wonderfully rich dreams that when I woke, I knew were meant to be poems. It was a gift.

SL: Sometimes. Not always, but, yes, the settings in dreams can very often suggest the natural world and how we relate to it. I can’t think of a particular poem right now, but that’s a very valid idea.

KK: In CMR’s spring 2016 issue, we published three of your newer poems, and I wanted to ask a few questions about those. There’s a poem called “Grace” we published in that issue, and it builds to this amazing stanza that I want to read and have you comment on—or maybe ask you to read—the stanza that begins “if I knew how I’d combine…”

SL:
If I knew how I’d combine those
whale and canary notes, then add in
the ones a composer captured from the sun.
Music, we’ve learned, changes the brain.  So what if
someone wove a concerto
of stars, elephants, whales, birds, toads, mezzo sopranos, cicadas. . .

so we’d hear each as part of the other,
and all our brains begin to harmonize.

KK: I just think that is such an evocative ending for that poem, or close to an ending. Can you talk a little bit about how you got there or what associations you have with that stanza?

SL: I do write out of the unconscious so much, I forget how things came or even what it felt like to be writing them. I think, really, it’s all about the connections of everything to everything, which I say in another poem. We’re all a part of something else and related to this something else, and, when we’re lucky, we can make those things harmonize.

KK: It feels like the way that opens out—I mean you move from these readings and things that you’re finding out about whales in the earlier part of the poem—and then there’s an opening out as if there might be lots more that humans can discover to do.

KK: I’m not sure all humans feel that way, right?

KK: The second poem that we had online is “Ghost Animals,” and in that poem the narrator evokes the spirits of other animals, as—I mean I want to call them muses, I’m not sure if you think of them that way—

KK: —and even as she acknowledges that she can’t really speak for them. The poem closes,

whatever animal comes unbidden
and invisible must have something to tell
or something to ask. I wait for the words
that can’t be spoken.

Can you talk about the role of other animals in your poems, and is it appropriate to talk about animals as muses?

SL: Well, muses and spirits, and in this case, it’s more like spirits. A sense that those animals are out there, they live in the bamboo, close to the cabin; and they’re part of the reason, I think, that I love going to that little cabin that is back in the bamboo, and it does feel like a very spiritual place… even the dogs know it.

KK: In the poem “Begin with Rumors of Water Crystals,” which completed the trio of poems featured in CMR, there’s an interweaving of the narrator’s learning from scientists, but there’s not a boundary between science and art, or science and poetry. In a culture that often separates science from art, how do you work with what you read from the scientists in your poems?

SL: Well, I’m reading scientists as a non-scientist, so most of the time I get very excited about new discoveries of all kinds—but I can’t say that I really understand them. They come in as beautiful ideas that I’m never going to really understand, but I know that they affect us in all kinds of ways. A number of scientific things come in here, one of them which I talked about, I think a little bit, in my reading, I read in a newspaper in France several years ago. I cannot find that newspaper, and I cannot find any other reference to it. There are people who think I must have made it up—I didn’t make it up, I swear—I can’t prove it, but it’s the lines [from “Begin with Water Crystals”],

I think Chopin would be amused if he knew
the DNA of mice, transcribed

as notes, repeat a melody of his,
genius writ small and lowly.

I just loved reading that, and for a while I thought I should take it out of the poem since I can’t prove I read it, and then I thought, no, it’s too good to let go.

KK: It is. Maybe someone reading this interview will write in.

SL: Yes, wouldn’t that be nice!

KK: I think in this particular era as we’re learning so much from scientists about the extinction process that is going on with nonhuman animals, plants, and our world—

KK: Yes, and soon us. It seems to be daily that we find out more that suggests things are going more quickly than we thought they would. Writers are struggling with how to write in an era of mass extinction—I mean, how do we even think about that? Do you have any thoughts?

SL: Nothing very profound, except that I think it is on the minds of many of us. I think there are a lot of people who don’t think that it’s going to happen and believe that things are going to go on as they are. But to me it seems that there are indications every morning when I read the paper. The number of hurricanes, the number of other natural disasters are coming faster and faster. And, unfortunately, as Auden said, “Poetry makes nothing happen,” but we have to use our voices as we can.

KK: That’s such a beautiful landing. I can’t decide where to go from there!

SL: Yes, where do we go from there? I don’t think we do it with poems—we need to write letters to newspapers, and politicians, and give money to the right people, but, alas, poetry does not get to the people we need to persuade.

KK: I’m wondering about that line, though, because you know I’ve been thinking about it, too— “Poetry makes nothing happen”—whether there is a way of being, because when Auden goes on it that poem, he talks about a way of being or a way of happening that poetry is constantly modeling. Does it model a way of being in the world, an attention to detail, an openness to the spirit animals?

SL: It absolutely does that for the individual. We would like it to have wider consequences, but it does make us conscious of things that we can appreciate, for as long as they’re here. For as long as we’re here. And maybe this will make a difference to a few people.

SL: Right. I think if poems make an impression on readers or hearers it might have to do with our connectedness, and if we understand that, I suppose there is at least a remote possibility that we might persuade others that that connectedness is important and affects everybody.

KK: I’m struck by the couple of poems that we just talked about where that connectedness is such an overt subject, in “Grace” and in “Begin with Rumors of Water Crystals.” Is there anything that you’d like to say about these issues of ecojustice and ecology, such as the role of poetry, for instance, in witness around justice issues, or the role of poetry in the world of climate change?

SL: I would like to think that it could make a difference to at least some people, and maybe, once in a while, one of those people would be someone who actually has power to change things. I’m not optimistic about that, but it’s the best we can do. The only thing we can do is say what we believe through poems, or through arguments, or in other ways, and hope that external events start to penetrate the larger consciousness. I think we try to make our values known in all the ways we have, one of them is through poems, but we might be more persuasive in argument, argument that isn’t in poems, I don’t know. Maybe there’s something about the fragility of poems that echoes the fragility of the planet. 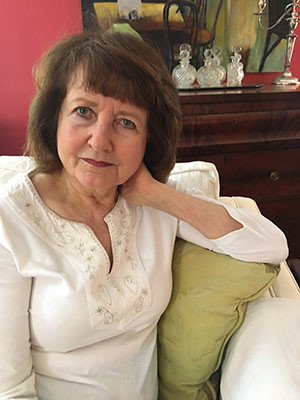 Susan Ludvigson is the author of Step Carefully in Night Grass, published by John F. Blair, as well as the following volumes, all from Louisiana State University Press: Northern Lights, The Swimmer, The Beautiful Noon of No Shadow, To Find the Gold, Everything Winged Must Be Dreaming, Trinity, Sweet Confluence: New and Selected Poems, and Escaping the House of Certainty. She has received prizes for the best poem published in a given year from Virginia Quarterly Review (1984), Gettysburg Review (2000), and the James Dickey Prize from Five Points (2016). Professor Ludvigson taught at Winthrop University in Rock Hill, South Carolina, from 1972-2002. Over the course of her career she has received grants and fellowships from the North Carolina Arts Council, the South Carolina Arts Commission, The Witter Bynner Foundation, The National Endowment for the Arts, The Fulbright Foundation, The Guggenheim Foundation, and The Rockefeller Foundation. She served as Appalachian State University's 2017-18 Rachel Rivers-Coffey Distinguished Professorship in Creative Writing.