While I Visit My Daughter, the News

A peacock’s blown into her neighborhood,
Driven, my daughter says, from Griffith Park
By yesterday’s record, Pacific wind.
Lucky, she tells me, we have all these trees.

In the motel newspaper, a six-part
Series quotes three army wives, their pictures
Beside one-liners: “He’s a good soldier,”
“I know he’ll be careful,” “I pray for him.”

In two days, my daughter’s neighbor has learned
To mimic the peacock’s odd call.  She squawks
Over the sound of traffic, perfecting,
She explains, a sound-check for lunacy.

Those wives are eighteen or nineteen, holding
A baby or a prom photo, someone
Prodding them to keep talking, remaining
On the line as if tracing kidnap calls.

This morning, the neighbor reports a night
Of coyotes, and yet the peacock rests
Upon her red-tiled roof, from where, she says,
That thing could photograph Los Angeles.

The three husbands are nineteen or twenty,
And I’m thinking that they won’t be back, not
That kid in the football shirt, not that boy
In the tux.  Those wives will live with strangers.

One woman reveals her photograph is
Purposely off-center, that she’s saving
Blank space like a seat at a sold-out show.
“He’s running late,” she says.  “He’ll be here soon.”

The aesthetics of removal: At last,
A collaboration of calls summoned
The unforgiving police, who emptied
The elaborate closets like burglars.

One wife announces that faith is comfort.
“I’m working bargains with God,” she goes on,
“Packaging my pledges and vows, sending
Resolutions to ransom his safety. “

When, over a furious surge of cars,
We hear the peculiar squawk, my daughter
Asks me if I’d bet which mouth was spouting,
Whether the sound meant fear or loneliness,

And as we hear that distended voice rise
Through the alien vocabulary
Of the dispossessed, I feel some goodness
Inside me tearing like frayed cartilage,

And Christ, I have to hike the neighborhood,
Limping upon the bone-on-bone bad knees
Of faithless exasperation, trying
To walk off my fear of each trusting voice. 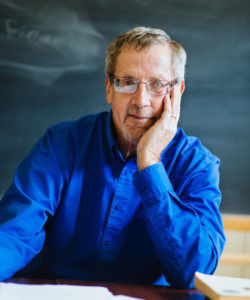 Gary Fincke’s latest collection, After the Three-Moon Era, won the 2015 Jacar Press Poetry Prize and was published in February; his next book will be Brining Back the Bones: New and Selected Poems, out in June from Stephen F. Austin University.  He is the Charles Degenstein Professor of Creative Writing at Susquehanna University.