In the Night Orchard

I know, because Paul has told me
a hundred times, that the deer
gliding tonight through tangleweed
and trashwood, then bounding across
Mount Atlas Road, are after his pears.

And who could blame them?
On the threshold of autumn, the Asian
imports, more amazing than any Seckle
or indigenous apple, start to ripen.
Then a passing crow will peck one open.

That’s when the whitetails who bed
and gather beyond Matson’s pasture
will catch the scent and begin to stir.
It’s a dry time, and they go slowly mad
for sweetness. No fence can stop them.

The farmers like Paul will admit
it starts in hunger, but how suddenly
need goes to frenzy and sheer plunder.
When the blush-gold windfalls are gone
and the low boughs are stripped

of anything resembling bounty, bucks
will rise on their hind legs and clamber
up the trunks. Last week Cecil Emore
found one strangled in a fork,
his twisted antlers tangled as if

some hunter had hung him there
to cure. We all remember what it’s like,
this driven season, this delirium
for something not yet given a name,
but the world turns us practical,

tames us for milder pleasures.
For Augustine, it was actual pears
that brought him out of the shadows
and over a wall, for Eve, the secret
inside what we now say was an apple.

Others have given up safety for less,
and I wonder, catching an eight-point
buck outlined on the ridge amid spruce,
if it’s this moonstruck nature that renders
the ruminants beautiful, or if we stalk

them out of envy, not for the grace
of their gliding, but for the unadorned
instinct that draws them after dark
into trespass and the need to ruin
the sweetest thing they’ve ever known.

At the writing table
my sinews tighten,
and a cricket in the sugarbush
is mourning. He is sawing

a cradle and a coffin,
and if he fell forever silent
tonight and went simply rigid
as the soil settled,

green debris rotting
to form a seam of coal
around him, his angles could
be pressed indelibly

into what might resemble
a stone. Someone centuries
from now, if anyone is left,
might unearth a fossil

to find in its insect
outline a symbol and say,
This is a letter deep
in the alphabet of some ancient 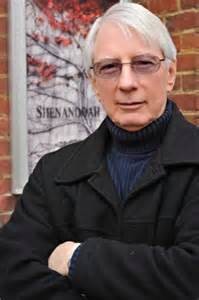 R.T. Smith is Writer-in-Residence at Washington and Lee University, where he has edited Shenandoah since 1995.  He was previously Alumni Writer-in-Residence at Auburn University, where he assisted with and then edited Southern Humanities Review.  Prior to that, he took his M.A. at Appalachian State University and founded Cold Mountain Review.  In 2015 he returned to ASU as Rachel Rivers Coffee Distinguished Professor of Creative Writing.  Smith is the author of over a dozen collections of poetry, with In the Night Orchard: New and Selected Poems(2014) as the most recent and Summoning Shades forthcoming.  His books have twice received the Library of Virginia Annual Poetry Award, and in 2014 he received the Weinstein Prize for Poetry from the Library of VA.  He is the author of five books of stories, with Doves in Flight forthcoming in 2017.  He has received the Governor’s Arts Award from Alabama for his writing and the Virginia Governor’s Award for his work with Shenandoah.  Smith lives on Timber Ridge in Rockbridge County, VA with his wife, the novelist Sarah Kennedy, and their bluetick hound Gypsy, a dedicated student of the whitetail deer.