At the farm in Floyd, Virginia on Thunderstruck Road, the weeping willow looked out of place. There was a spring-fed stream bisecting the property, but this willow was nowhere near it. A previous owner planted it in the lawn near a gravel driveway.

The farm was hobby farm that produced next to nothing and had no discernible purpose other than to accommodate livestock: Oberhasli goats, mules, donkeys, a horse, four pompous llamas who looked down on their owners, and three Vietnamese potbellied pigs. All of the pigs had been mistreated and neglected by previous owners. They had all been rescued and now wandered about this farm at their leisure. There was a small, blue plastic swimming pool beside the front porch, and occasionally one pig would dive in for a bath when the tender Muscovi ducklings and their mother were nowhere in sight. That particular pig was exceptionally clean. She never smelled. Never rolled in mud. Bathed regularly.

Pigs have excellent memories. One of the pigs was the size of a small hippopotamus. Her name was Violet, but the boys on the farm sometimes referred to her as “Violent,” because every so often she’d snap at you without the least provocation. Even still, Violet was easily charmed—there are two ways to charm a pig. You have to rub where their flesh is coolest and softest. Behind the ears is one area; on the belly is another. But even when Violet was at the height of her “charm,” she would sometimes let out a harsh grunt and snap at you. The snap scared the boys on the farm, but it was never in earnest. She had never bitten the boys. Like Quentin from The Sound and the Fury suddenly jumping up, yelling out, “Did you ever have a sister? Did you?” and getting into a fight—something would dredge up in the mind of this pig. Something dreadful, painful, and perpetual.

The mother who lived on the farm cared for these farm animals with her soul. She would milk the goats every day, and sometimes her son would help out. The goats produced an incredible amount of milk. One goat, Sarah, gifted us with two pales of milk, and then we fed the milk to the pigs. Hog Heaven.

Every Thanksgiving the mother made a special bran mash for the animals with chopped up carrots and apples, delivering it to their troughs, piping hot. Sometimes the donkeys would buck about upon taking in a heaping mouthful of the steaming mash. The llamas generally turned their noses up at it. All too regal creatures. Whenever the mother left the farm for more than a day, she would call the house and ask her husband, “How are the animals?” and then, “How are the kids?”

This mother’s mother was a hard woman descended from Dutch immigrants. Worn down by the general grind and tedium till she was a rock. She was a talented artist and painted china in her spare time. As a young woman in Alexandria, Virginia, she was to interview for a position as a professional artist. Two hours before the interview, she veered off down an unfamiliar street and kept walking, nerves akimbo. The shadows of the trees concealed her. Nobody recognized her. Her left arm trembled as it always did under such circumstances. Later she would acquiesce to a job as a telephone operator at AT&T and marry another operator who worked in the Pentagon.

In the back yard of the townhouse her daughter enjoyed climbing the old chestnut tree against her mother’s wishes. Once, she came across a bird’s nest, three blue spotted eggs nestled within. She took the eggs in her hand and shimmied down the tree carefully. Running to tell her mother what she had found, she tripped in her excitement on the stepping-stones leading up to the front deck, and the eggs broke open, clear and yellow. She scooped up the shards and ran inside.

“Look what you did!” Look what you did!” the mother scolded the daughter. “Come with me,” the mother said, grabbing the daughter firmly by her arm. Later, on frequent recollection, the time that passed then seemed far longer than the actual half hour indicated by the old, oak grandfather clock in the mother’s bedroom. The daughter would never forget the persistent ticking of the clock. The mother bird came back to the nest, flitting about fervently in search of her lost eggs. And the girl, peering through the pristine window under the shadow of her mother, wept like Niobe. 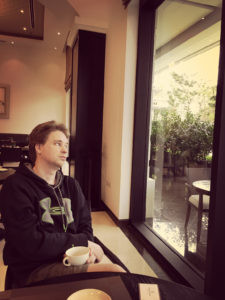