The man in the waiting room next to me
is speaking of perch and sunfish.
His friend tells him how to smoke cod.
I had been thinking again, just this morning,
of giving up eating my fellow creatures,
deciding whether fish should be on the list.

I’m concentrating
on the Times, a man’s delight in whales,
his photographing them.  Snorkeling
near the islands of Tonga, he’s greeted
by a humpback calf.  It swims so close
he has to lower his camera.  A moment passes.
He feels a tap on his shoulder.  Turns.
Peering into his eye is the eye
of the calf’s mother, who’d touched him
with her pectoral fin, weighing
more than a ton.  The tap is so light, so graceful,
the man knows she means “too close,” but it’s like
a finger to the lips.  He begins to swim with them.

More whales on another page.  Bulls.  Turns out
they’re learning each other’s songs—the songs
spreading east, Australia to French Polynesia,
melodies from one pod turning up
as phrases in another’s compositions.  More variety
each year.  One researcher says she thinks
it’s all about sex—new repertoires
to serenade the cows.  This makes me think
of Coco, my canary, who pulls trills
from the outside birds into his April love songs.

If I knew how I’d combine those
whale and canary notes, then add in
the ones a composer captured from the sun.
Music, we’ve learned, changes the brain.  So what if
someone wove a concerto
of stars, elephants, whales, birds, toads, mezzo sopranos, cicadas. . .
so we’d hear each as part of the other,
and all our brains begin to harmonize.

Still waiting, I doze,
hear armies choiring together,
percussion of carnivores laying down their knives.

We knew they were out there at dusk,
all that bamboo for cover, to say nothing
of the thick forsythia, distracting the eye
with its yellow flags.  You know they’re there
when the owls come out, telling each other
across the yards, and when the dogs
come slithering through their hatch door,
heads down and quiet.  It’s then
I head for the cabin.

I suspect they slip in
through the side window.  I turn on
the lamps, not the overhead light, and say,
“Welcome.”  I don’t want to scare them.
My “spirit house,” Mary called it, and I take
it on trust.  Whatever animal comes unbidden
and invisible must have something to tell
or something to ask.  I wait for the words
that can’t be spoken.

Begin with Rumors of Water Crystals

Mary tells me they shrivel,
lose definition at a growl or the crack

of a pistol.  I can almost see them devolving,
amoebic in a moment.  But, she says,

or the voice of Cecilia Bartoli—
becoming, then, elaborate snowflakes.

I look up the photos.  Under a dark
field microscope they could be ornaments,

I think Chopin would be amused if he knew
the DNA of mice, transcribed

as notes, repeat a melody of his,
genius writ small and lowly.

I read that certain mosquitoes
cannot mate in the absence

of literal harmony.  The pitch
made by the male’s beating wings, faster

than hers, adjusts as she catches up,
creates a sizzling duet of perfect fifths.

by two until the frequencies are audible—
the way he finds the pitch of a planet as it orbits.

Plants blackened in my house
before divorce, discord

a high wind howling, setting
leaves adrift.  That was years ago.

I enter my dining room, a sunny garden,
red and yellow Christmas cactus,

herbs in their small pots, thickening.  There,
at breakfast, I listen to “Carmen of the Spheres,”

composed of sounds Fox captured from within the sun,
The music slides, reedy, thin, wind chimes

entering my body at angles,
foreign and attuned.

This same morning, listening to the radio, I learn a ground
is a repeating bass line.  Each instrument layered above— 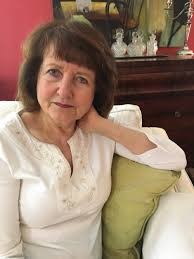 Susan Ludvigson has recently published poems in The Georgia Review, The Southern Review, and Five Points, for which she received the James Dickey prize.  A recipient of NEA and Guggenheim Fellowships, her most recent collection is Escaping the House of Certainty, LSU Press.  She will be the Rivers-Coffey writer-in-residence at ASU in Fall 2017.