It will happen on the day I look down
at blue and magenta leaves
which are probably auto air fresheners
thrown onto the roadside, or the day
I take the long slide on a fatal
slice of lime tossed among the kayaks
racked like so many spiritual
ventures. High summer,
Mr. and Mrs. Eugenides in their
red vacation-rental convertible,
the whole town become an ego
theme park, and I’ll want to follow
the fox’s elegant footprints out across
the dunes, right up to the den’s
sandy apron under the pine duff,
and beg admission. But the foxprints
will be gone, and the fox,
knowing enough to hole up
and wait out this all too-human
season, and I’ll fill a pocket
with sunflower seeds and take
myself into the beechwoods
that defend a pond of water lilies
lit like white candles and scenting
the heat with licorice. On the path
I’ll hold out both palms like
a garden statue, thinking Brother
Chickadee, Sister Chickadee, but
sounding like pish, pish, pish,
until one from nowhere clamps
a finger–the Franciscan moment–,
taking its time, hunting judiciously
for just the right seed, passing
its grip down to me,
a strength, a way of holding on.

I was thinking about weed-whacking the path
when something large dropped onto
the tip of that dead tree thirty yards from
the window. The usual red-tail?

There was no posse of jays or blackbirds. Then
the barbed head that bursts the surface of  bays
registered, and the severe bill-hook,
and only then the osprey’s black and white.

It leaned and began tearing whatever was pinned
in its feet, turned it so I could make out
the silver of fish belly. From time to time it
looked directly at me, plucking the flesh,

apparently not threatened by binoculars.
“Fish Hawk,” of course,
no other nickname but its function.

Revenant from its chemical oblivion, fish gone,
it cleaned and groomed itself. Was it so apparitional
before DDT? They say a poultryman
might mount a wagon wheel on a pole back then

so the fish hawk could construct its elaborate nest
up there and drive off any chicken hawks,
saving its young and the farmer’s,
which it had no taste for.

Two in the troughs the wind made
in snow drifting across the deck,
taking their chances since yesterday
for sunflower seeds the cardinals
and chickadees knock from the feeder,

against the redtailed hawks and that yearling
coyote I saw floating up the fireroad,
so quick it barely touched down
long enough to leave snowprints.

Given what comes from the air
without warning, and out of the marshes,
I know that longevity means nothing
for them, but where are they?  All day the souls
of children in Limbo have troubled me,

that savage human neverland
that’s too much theology for a handful
of feathers defending a heartbeat
while this white absence rumbles through. 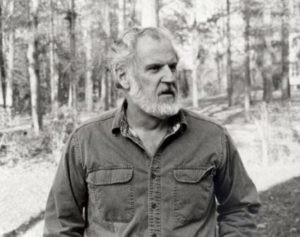 Brendan Galvin is the author of seventeen collections of poems. Habitat: New and Selected Poems 1965-2005 (LSU Press) was a finalist for the National Book Award. The Air’s Accomplices, a collection of new poems, is available from LSU Press, and Egg Island Almanac appeared from Southern Illinois University Press in fall 2017. He lives in Truro, Massachusetts.