Down Through the Field of Spent Dollar Bills

Creek (upper, thin)
It’s a corpse hidden poorly; I’ve stumbled upon it a few times. Never told a soul. Not once. You keep that kind of thing to yourself. Still. It’s not much more than a ditch with water in it, narrow, thin, brought down the slope of the field from some distant font. Slow to human eyes. Silent to human ears. I can’t claim to know its life. It is too much to know. A thing without color. Color just out of sight. A thing with a scent of the kind of life that lives in decay. A thing you don’t see until you’re looking for it. A body. I’ve never heard anyone mention it. No need. A waste of words. You drop into it once while running a cow out of the forest. The ground vanishes away like a hangman’s trapdoor. You fall. You stop. You hurt. You rise. It’s easy to keep a thing like that secret. No one needs to know anything. No one wants to know anything no one needs to know.

School House (no children)
This. This they do talk about. Everyone who sees it. Farmer and archaeologist and bequeather of government funds. An artifact. That’s what they call it. Antique. Something worth saving. Worth more than the lives of the field it sits in, crumbles in, discovers decomposition in. Than the cows who find shade under it. The owls who nest in it. The memory it stirs in those still dying. The wood itself is worth less than the thing is. The thing, dead and broken and breaking as it is, is worth more than a heartbeat, breath. Worth more than I am worth, yes. And worth, as we’ve been taught, is all that we have to care about. Why else till the fields? Why else feed the cow? Worth is the soul in us. The family bond. Worth: a sum of money. A tumor kept safe in the pocket. Also, the heart that keeps us in motion. Also, the lungs that give power to the blood. They would be happy, those who took an axe to the trees, made a skeleton, gave it flesh and soul. Left it to shatter on itself. They would be happy that their work is worth more than ours.

Hole (now filled)
I dug a hole in a piece of flat between decline and incline. Not a deep thing. Just deep enough to keep the field from my eyes. I could not see beyond the soil, opened wound of a creature long dead to the eye. What could I see but the twitch of half-buried worms, the drip of unsettled dirt onto ground lower than ground? I lay myself down, sun and cow and circling hawk sole witnesses. The cold is, I think, like dying or being born. The smell, though. The smell is all good things, all things growing and moving and yielding control to whim of gravity.

Mushrooms (forest floor all covered with leaves)
So many little lungs, breaths in the morning.

Weeds (along the bank of the creek)
I don’t know their names. I won’t. I don’t care. Don’t have the time. All sharp, all of the nature of knives. Bite and rusted nail and flesh between fingers. Concealers of the drop into frozen creek. Treachery given body. They have enough in them to survive the cold that will come, has come. We do not pull them up. Nothing needs to grow there. Being worthless to an industrious mind can be the survival instinct at work. We own the land, yes, it’s true, but we can’t keep from the land the life it owns itself. It grows despite the ruminating stomachs we release into it. It grows and stunts the eye; it hides the snake and the uneven ground. It keeps itself safe like anything does: with enough vim to shatter a leg. Enough of everything to cripple the bull, stall out the forward momentum of vitality, virility.

Field (cows all around, nothing but cows and the land they stand on)
They’re all there, now that it’s summer. If I walk among them, they’ll only stare at me, jaws set in their seesaw. The field thins as they fatten. We fatten as they are thinned. Still, they are here now. Partaking of the grass, in pursuit of the shade of any standing body, hooves imprinting brief instances of weight in mud, weed, and creek-bed. Soon, as the year moves onward in its downward crawl, they will all be moved to a place more distant, a peak cold and fresh. Here, though, now, the flies fly because the cattle lives on this ground, this grass. Life stacked on life. Living made perpetual. Continuous. The imposition of cycle. Life forced, manicured into a realm not naturally its own. Still. Is the presence of even dishonest life preferable to a complete absence?

Lot (for the cows, floor all of mud)
The bottom of the field. Their telos. Where they all must go. Moved by our voices, voices that are given worth by not much more than this exact day. It’s when the screams most appear, the hollers and yelps, the caws that verge on the bestial; beast moving beast, runners running runners. Bodies moved by sound, blood, the heat of muscle and breath drawn too often. They are pure force as they crowd into the muddy space, an oblong defined by spare wire and sparer wood. And yet, none escape. Despite the mass, the reverberation of low and moan, the great dark weight packed into such density, it’s a wonder the friction doesn’t spark flame. They are worked by our hands, the youth sorted, immunized against the ails of their given lives. They will live from here, a life once lived. Still, the marks they’ve left in the mud will persist, at least, until the next rain.

It’s the swing of the aged elbow closing it; it resists, but it must move, it knows. And quick. To prevent threatened escape. Everything here that’s built is built for that purpose. To prevent escape. Because escape defeats the purpose of living here. That which we’ve brought to the land is what anchors us to it. It’s true. If we let it leave, let all this that we’ve grown and let grow escape from our working hands, then it’s only an end that we’ve made. A pin stuck in the lung, air escaping, slowly, maybe, but always, always leaving, always moving away, upward and beyond reach, always farther. And the body will lay in the grass by the creek, left by its own acts to molder, dissolve, approach but never quite achieve a vanishing. Left there to be found by eyes that, drawn to the promise of an empty expanse containing all living things, might blink in shock at their discovery of us. 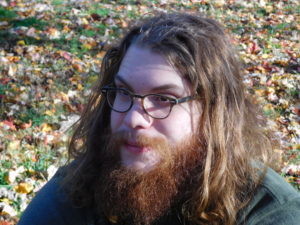