by Kim Trainor Issue: Fall/Winter 2020 Special Issue on the Undiscovered

In the course of his argument, Ortega gains the important insight that each of us is an ‘I’ not because we each have a special zoological apparatus called ‘consciousness,’ but because each of us is something, and that something can never be exhausted by conscious introspection any more than by outward description. It follows that every non-human object can also be called an ‘I’ in the sense of having a definite inwardness that can never fully be grasped.
—Graham Harman, A Theory of Everything: Object Oriented Ontology

Now then, imagine the importance of a language or system of expressive signs whose function was not to tell us about things but to present them to us in the act of executing themselves. Art is just such a language; this is what art does. The esthetic object is inwardness as such—it is each thing as ‘I.’
— José Ortega Y. Gasset, “An essay in esthetics by way of a preface” (1914)

1.  I heard them first, nights in Point Grey, long before I knew their name.

7.  I would walk through dark streets, following their sound—the pulse of night.

9.  Of course, the colour perceived is dependent on the visual system specific to the perceiver.

11.  A rare mutation in its pigment cells—a missing layer of yellow xanthophores—that would transform reflected blue light into green.

14.  Reflectance spectra from the dorsal surface of each frog were measured with a spectroradiometer (Spectrascan model 714) using the standard beam method….in an otherwise darkened experimental chamber.

15.  They have superior detection of blue light—we think they can see in the dark.

16.  As they hunt, prey blurs across their field of vision, like a long exposure film.

21.  After the first heavy winter rains in California, every roadside ditch, every pond, every puddle, every little spot of water has attracted to itself a Tree-toad chorister. —Gayle Pickwell, Amphibians and Reptiles of the Pacific States, 1931

22.  Each male defends his song territory.

23.  This experiment will place each frog against a dark brown or bright green background.

24.  The following ED equation was used because it allowed us to track color change in a three-dimensional color space:

26.  A Pacific tree frog will eat almost anything: spiders and ants, little beetles, leafhoppers, isopods. Anything smaller than itself. Even its own shed skin. They are voracious predators.

28.  This experiment will test the impact of climate warming and rapid pond drying in Pseudacris regilla.

31.  Sometimes I could not hear them at all. Or, suddenly—

35.  We plotted the hue, lightness, chroma, and color distances against time…

36.  I heard them on a road trip through the Mojave, although I didn’t know them.

37.  This experiment will measure the impact of road noise on Pacific chorus frog communication.

38.  The recording equipment was comprised of a Sennheiser MKH20 microphone (sensitivity: −32 dB re 1 V/Pa) in a Telinga parabolic directional housing, attached to a Zoom H4n recorder…

39.  The desert singing in the night.

40.  From British Columbia to Baha California. From the Pacific Ocean to 10,000 feet above sea level. The Sierra Nevadas. Soda Springs. Nevada. Montana. And two frogs taken from Port Coquitlam, released near Port Clements on Haida Gwaii in 1964.

41.  We characterized the anthropogenic and Pacific chorus frog components of each site's soundscape over the course of both breeding seasons by quantifying ambient road noise levels and timing as well as general chorus structure.

42.  On humid spring nights they sing.

44.  When a female approaches a male, he abandons his song and assumes amplexus. She ferries him on her back to the quiet shallows.

45. The males will often attempt to mate with any non-vocalizing amphibian that gets too close…not only male Pacific tree frogs, but other species of frogs, and even salamanders…

46.  She lays between 30 and 70 eggs which the male tree frog envelopes in milky sperm. The loose mass of eggs is snagged on small twigs or grasses.

50.  The tadpoles have been seen clustered together like a small black mirror to concentrate the sun. This speeds up metamorphosis.

55. As tadpoles metamorphose, the eye lens flattens to accommodate light’s speed in air.

56.  They stop eating, as their mouths and digestive tracts are rearranged.

57.  Within days on land, they absorb their tails. 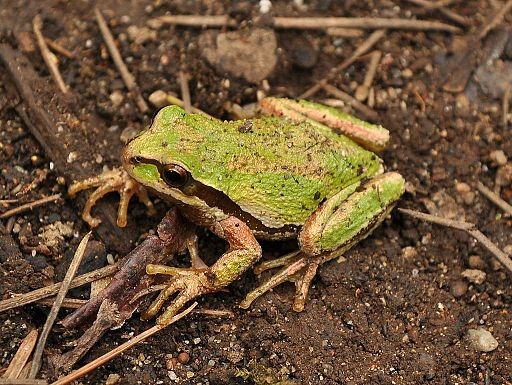 60.  They have been recorded by web cams in eagle nests atop trees so tall they scrape the fog for moisture…hopping about capturing insects.

61.  Two fungicides, pyraclostrobin and tebuconazole, and one herbicide, simazine, were the most frequently detected pesticides in tissue samples.

62.  It can be concluded that H. regilla has control over and can change its hue, chroma, and lightness during time periods on the order of minutes…

63.  P. regilla is a habitat generalist that may be more resilient to habitat loss and fragmentation, and our results suggest they may not be especially vulnerable to more rapid drying rates expected in the future…

64.  For a long time, I had forgotten them. But now I remember. I listen to their faint pulse every spring.

You are in the back country, high in the Tonquin Valley.
I am tamped in this quiet space. There can be no signals
once entered. You gave me a rough sketch of your route—
a hostel here, an alpine road, a trail, a hut, a time to call
if you don’t return. It’s OK. I know how to be alone,
absorb silence. There’s a trick to it, like writing a poem—a descent
into self while letting go. And I have things to do.
I dig compost into the garden beds. I drink Wild Turkey.
I read late into the night, of the mysterious global Hum
that began in the 70s, a low-pitched haunted reverberating drone
heard only by 4% of the population. Is it external
to the listener, or does it come from within?
I read that the Arctic is locked in for a 5 to 9 °C increase
in temperature by 2080, devastating the region
and unleashing sea level rises worldwide.
I read that the earth is in bardo.
Listen. The hush of your skis
on white tracks, sough of trees, first crack of ice in spring melt,
creaks, retorts, bird tocks and hoots, your breath. Then startle
a white-tailed ptarmigan, its cryptic plumage, snow on snow.

Kim Trainor is the granddaughter of an Irish banjo player and a Polish faller who worked in the logging camps around Port Alberni in the 1930s. Her second book, Ledi, a finalist for the 2019 Raymond Souster Award, describes the excavation of an Iron Age horsewoman’s grave in the steppes of Siberia. Her next book, Bluegrass, will appear with Icehouse Press (Gooselane Editions) in 2022. Her poetry has won the Gustafson Prize, the Malahat Review Long Poem Prize, and the Great Blue Heron Prize. She is currently working with the musician Hazel Fairbairn on a series of poetry films based on Ledi, as well as on her most current manuscript, “Seeds.” “Integument,” her first poetry film, will be screened at the ZEBRA Poetry Film Festival in November 2020 in Berlin. Poems are forthcoming with Women and Environments International, Anthropocenes, and ISLE. She teaches in the English Department at Douglas College and lives in Vancouver, unceded homelands of the xʷməθkʷəy̓əm, Skwxwú7mesh, and Tsleil-Waututh Nations. Find her at https://kimtrainor.ca.

Share this article:
Fall/Winter 2020 Special Issue on the Undiscovered