pictured from Manhattan where our flawed imaginations contemplate
what happened this day, otherwise so much like others: benches covered,

as we walk along with our collars up, wanting a cup of coffee
from the corner store—papers sold out and no second delivery.

Someday we will be given away like children brought to altars
atop pyramids, sky turned taupe behind a skeletal moon

though we wish something would intervene (Aaron’s budding rod,
Arthur’s sword in stone)—earth in flux, and so breakable.

As If It Had Already Happened

If cities could float in the ocean
I’d like mine in the South China Sea
where I could dangle my feet in the water.

China will be the leader by 2050;
I wouldn’t mind floating in that direction;
I love red walls, roofs with a corner curl.

The city would be in touch with others, of course,
that’s easy now.  I can talk to Emmy from Alaska
while she’s giving Gabe his night-time bath.

The floating cities would each have mini-orchestras
with shiny brass tubas that glowed while playing
a Hindemith sonata as we pass one another.

If I needed a change of scene, I could sit
in my back yard and watch through the fence pickets
as the city passed trawlers and bobbing lobster pots.

The thing I’d like best is the city’s shores:
you could see out every window;
I wouldn’t mind sand tracked on the kitchen floor;

I’d know it would be hard for tanks with artillery
to roll up Main Street with their spikey guns
aimed at our faded-blue wooden porches.

Besides, we’d each have our own row boat.
If an air attack threatened, we could go
to the end of the street, shove off, escape.

I’d keep a little cooler in mine with some tuna,
pickles and beer for two, so we would be
fine until the whole thing blew over. 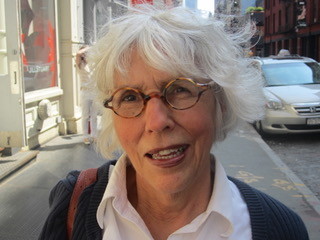