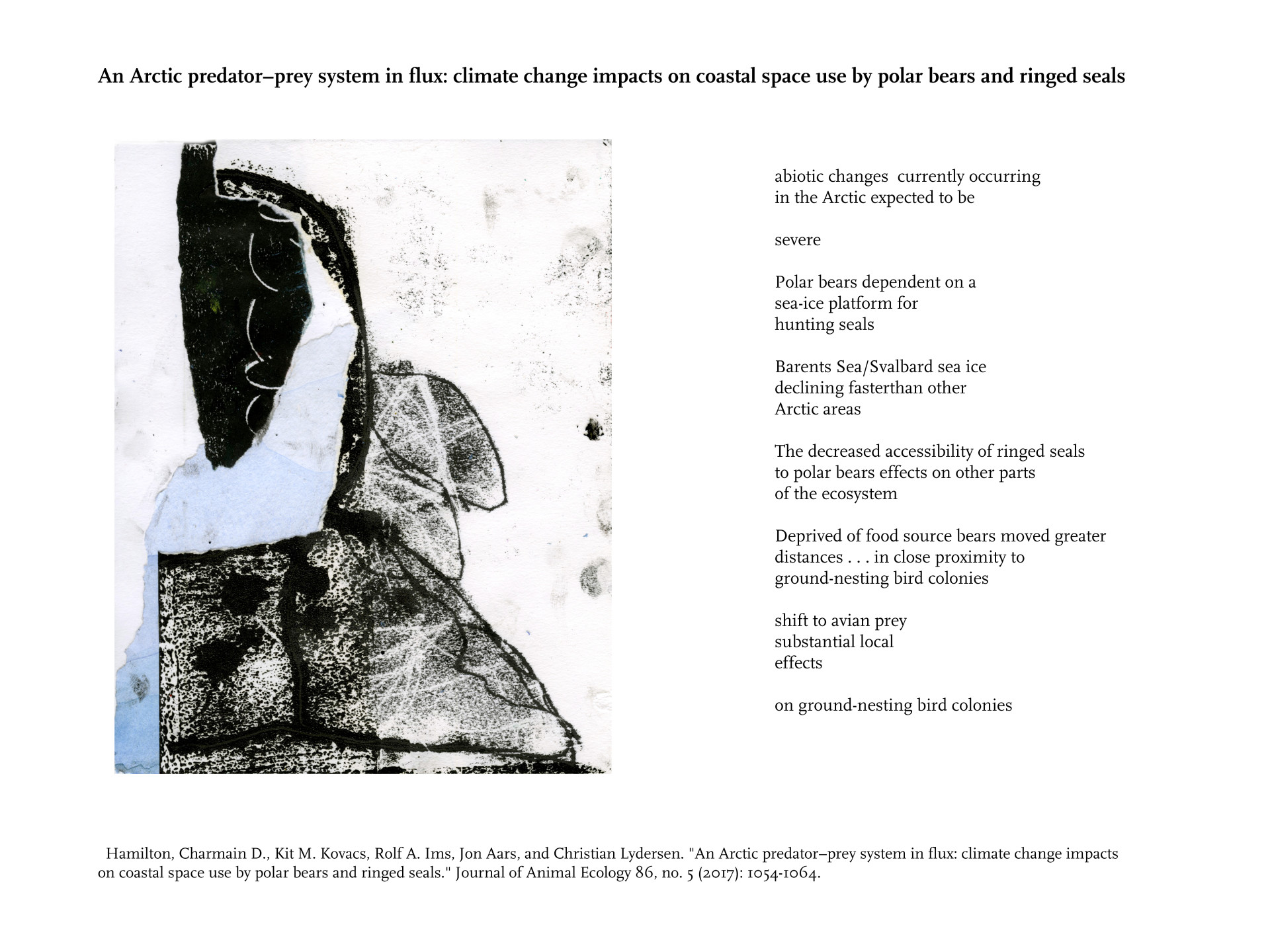 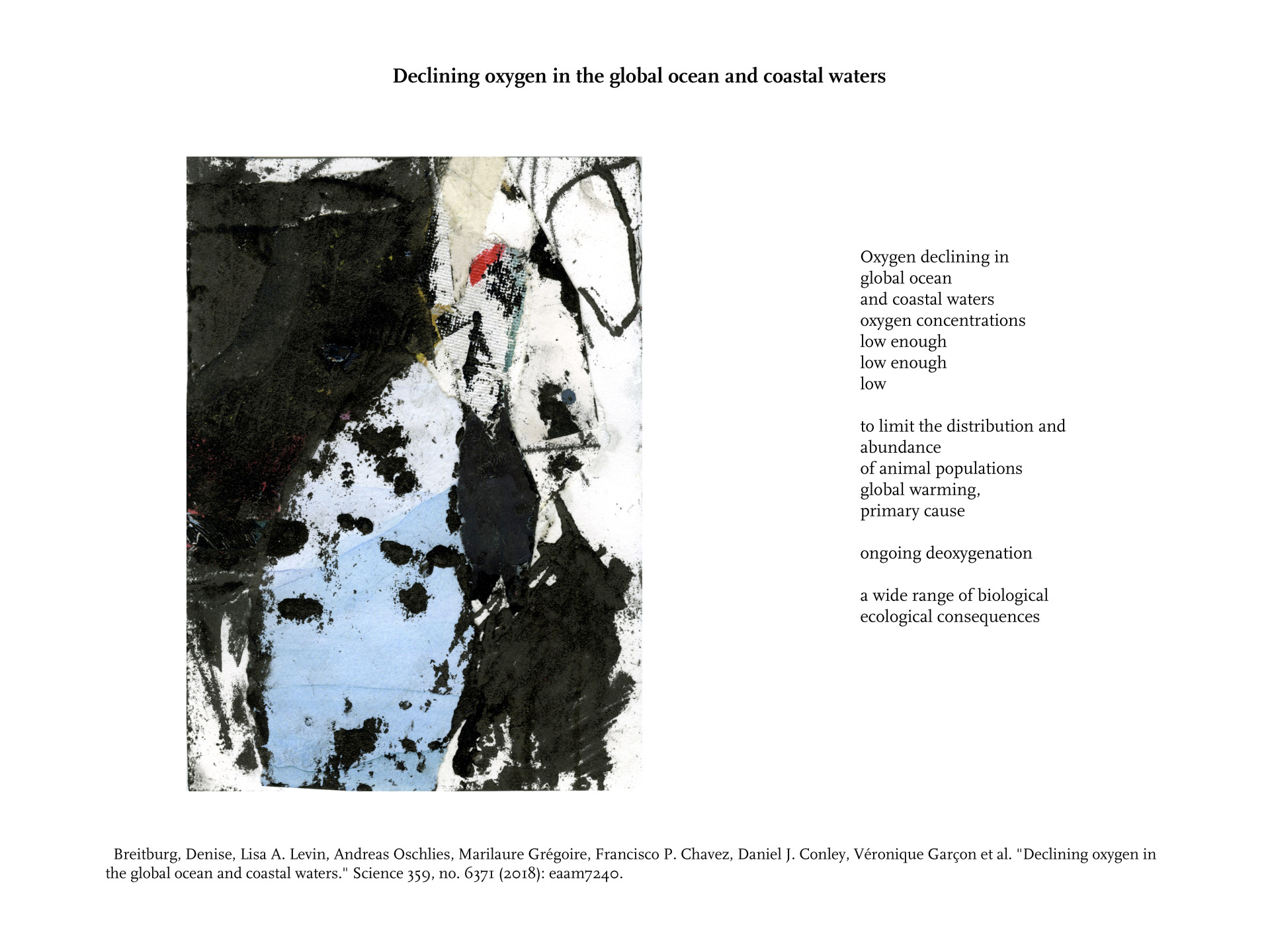 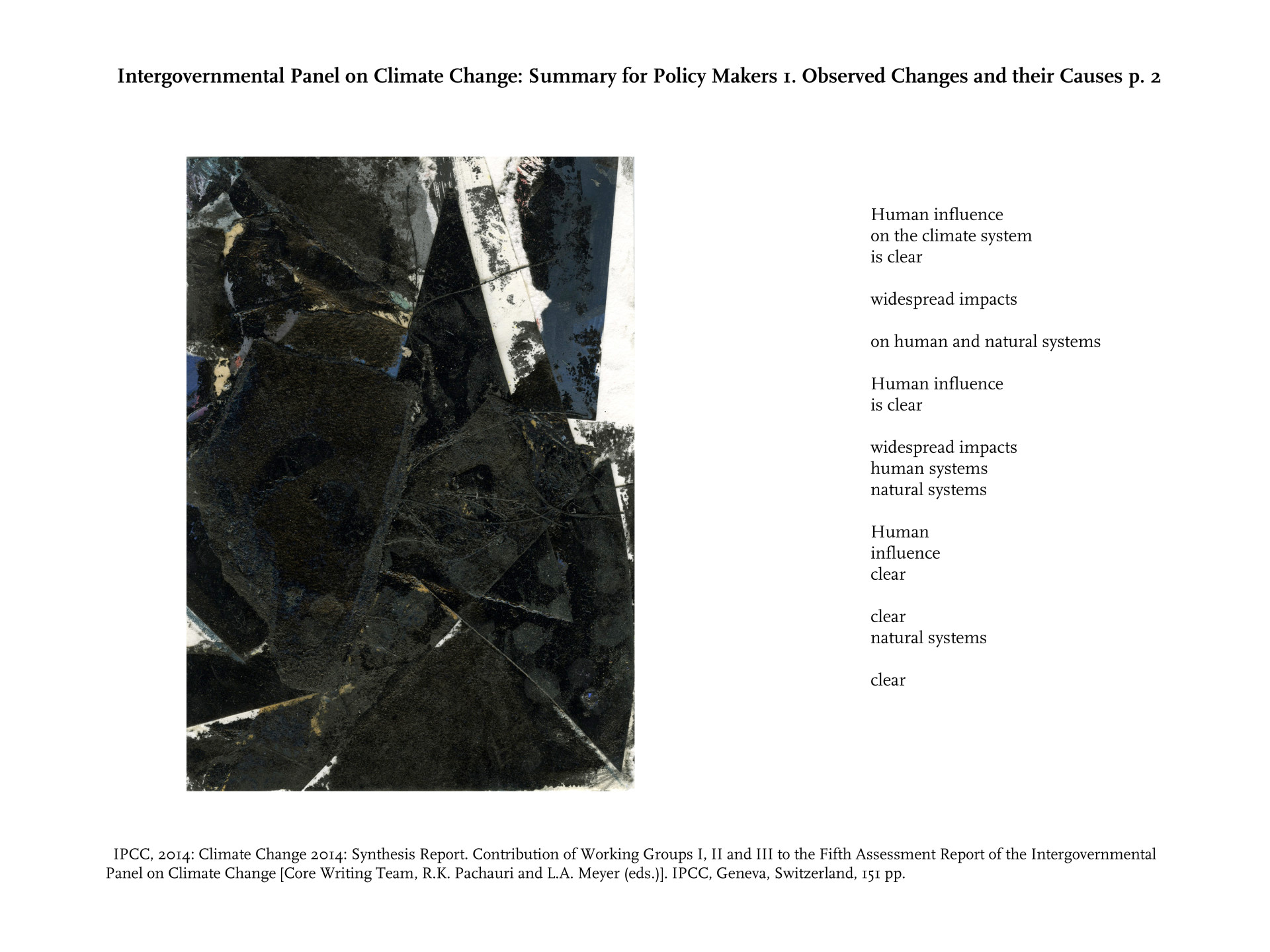 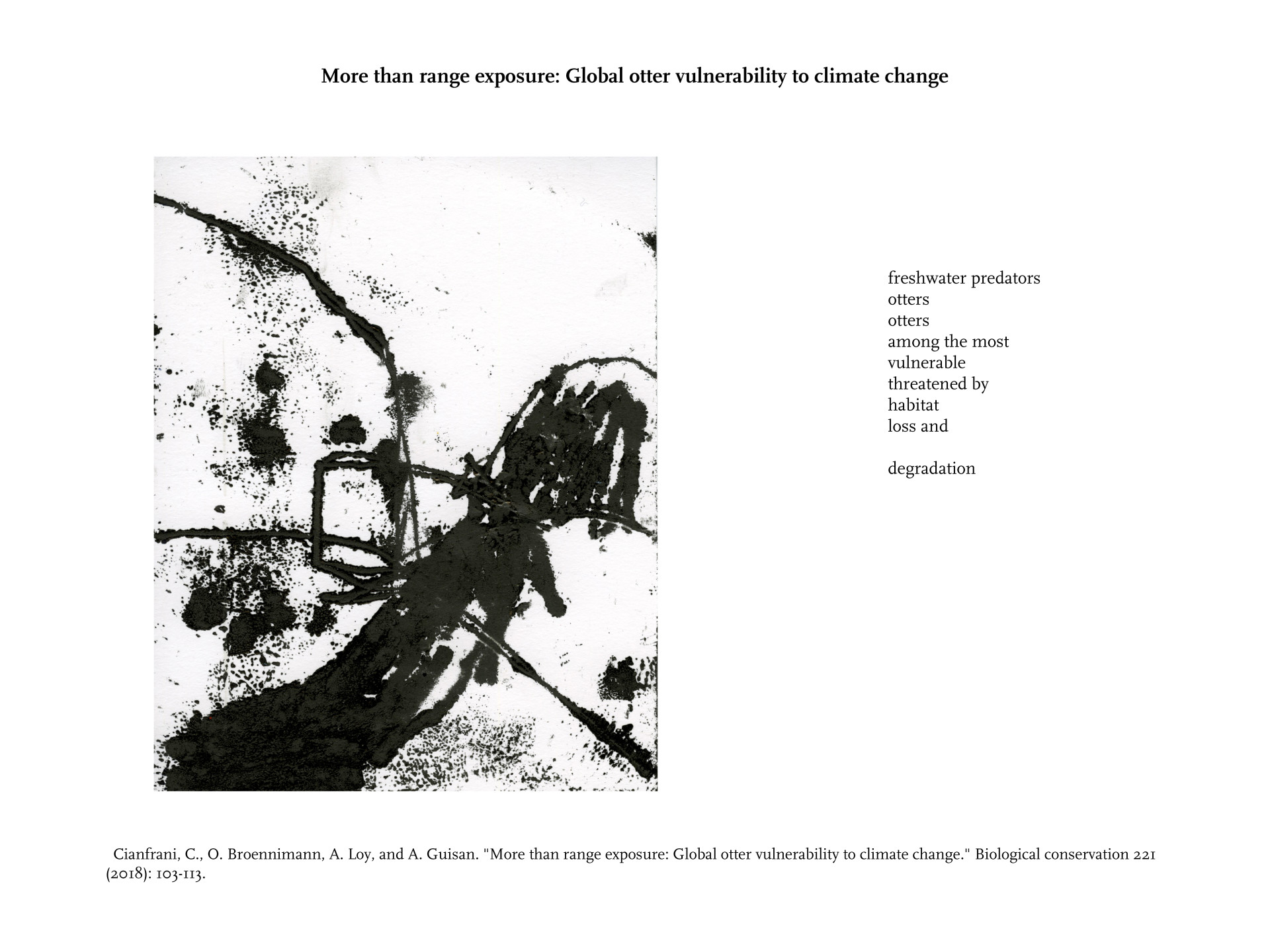 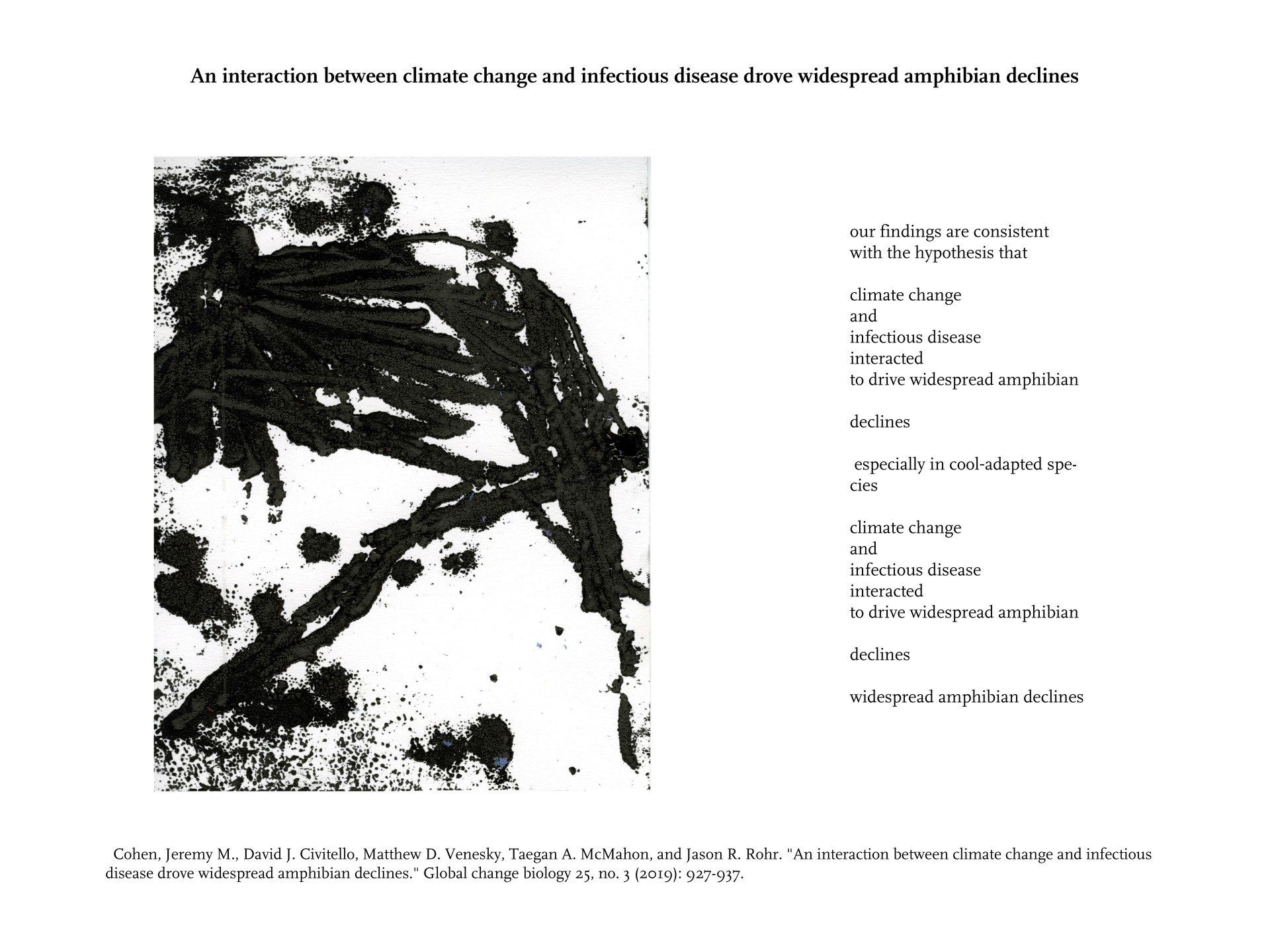 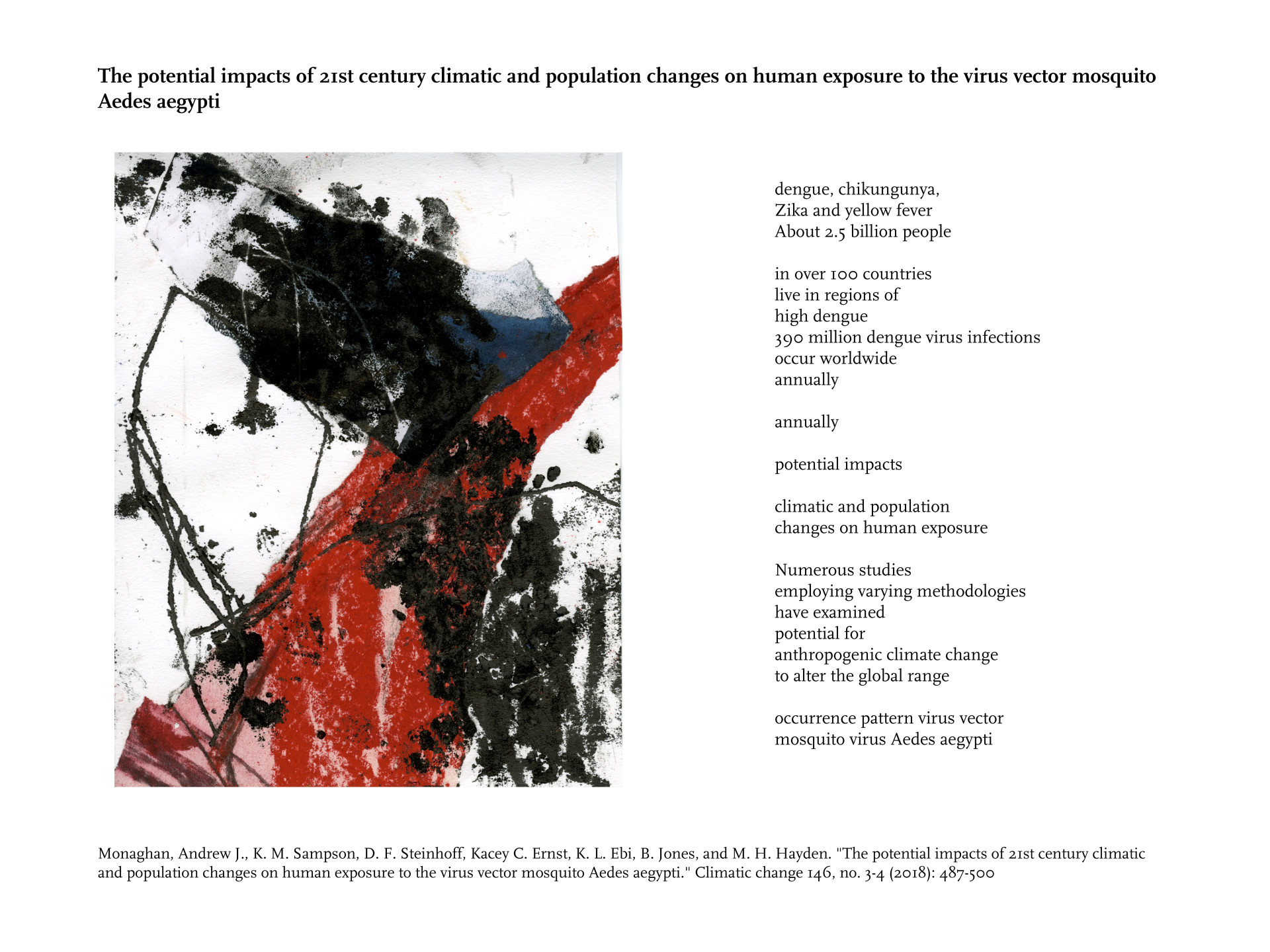 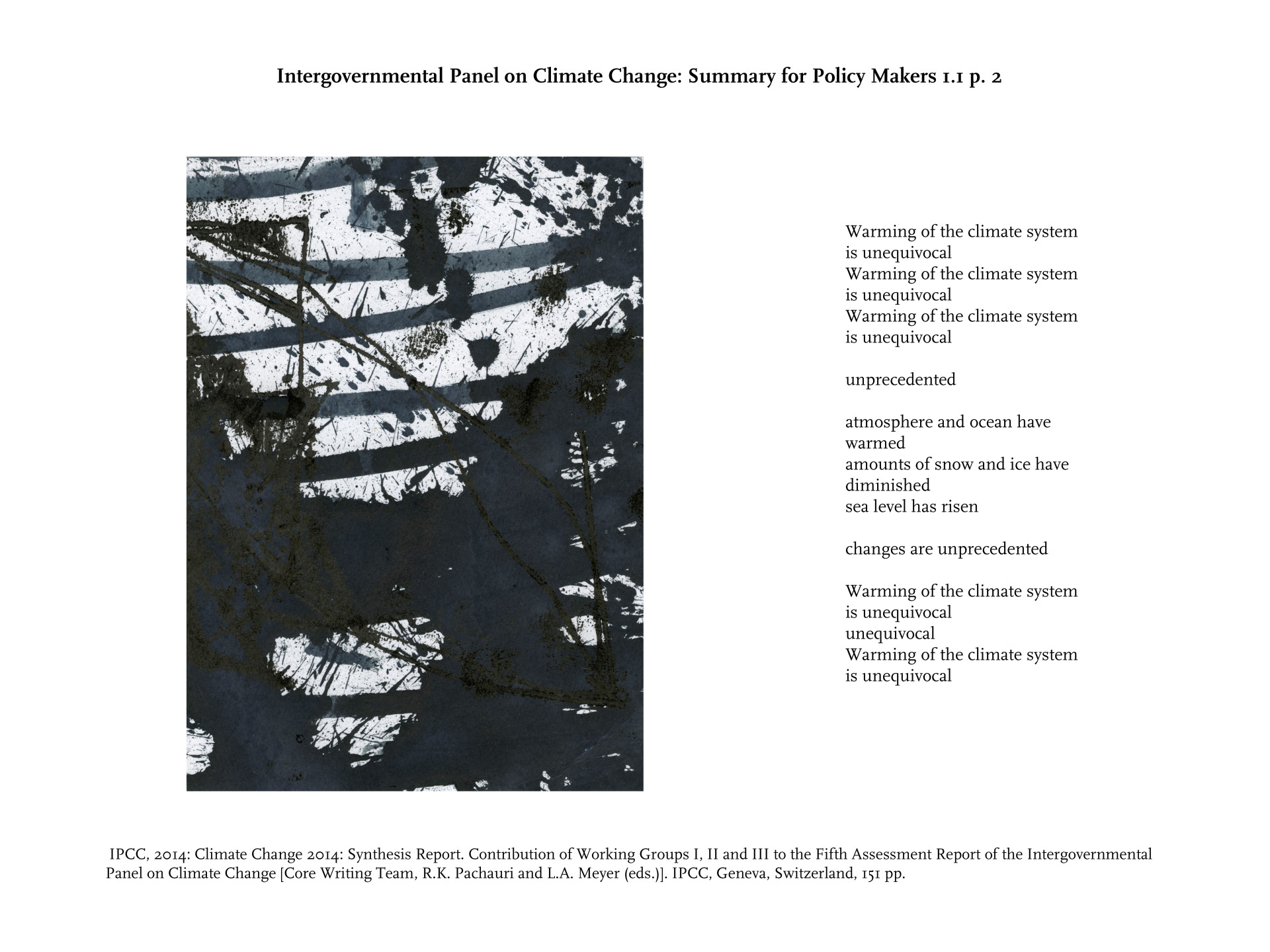 This work emerged from the organic collaboration of a fine artist and an evolutionary biologist drawn together by their mutual concern over escalating climate change and growing popular mistrust of scientific observation of that change. By pairing mixed-media collage pieces with poems made from science-based articles and journals related to climate change, we trying to start a provocative dialogue and encourage thoughtful concern for environment and truth.

This expanding project grew out of a shared love of nature, science, ideas, experimentation, art, and literature. Protecting the space where new ideas are born, protecting wild spaces small and large, understanding that as we kill the world around us, we are in the end only killing the best part of ourselves — this is at the heart of our collaboration. We resonate with Wallace Stegner’s plea, “We need wild spaces, if only to peek over the edges and look in.”

Each of the found poems presented here was constructed by scanning a scientific climate-change paper for meaningful phrases that capture the essence of the article. These bits of text were then extracted, arranged, and sometimes repeated to capture the feeling and mood of what the paper implicated for our future. The title of each poem mirrors that of the original scientific paper. The art and poems were made as a call and response to each other.

Like the poems, the visual art was created from the destruction of other works. The pieces are composed of remnants of older pieces that were destroyed in the process. Those former pieces, like former species, will never be seen again. Only traces of them survive in this body of work.


S.L. Peck is a biology ecology professor and teaches classes on ecology, evolution, and philosophy of biology. He has published over 50 scientific articles in the fields of evolutionary ecology and philosophy of biology. He has published four literary novels including the magical realism novel, The Scholar of Moab, published by Torrey House Press—a Montaigne Medal Finalist. His climate change fiction book, King Leere Goatherd of the La Sals, was a semi-finalist for the Black Lawrence Press Big Moose Prize for literary novel, which received a starred review from Publishers Weekly. His poetry has appeared in New Myths, Pedestal Magazine, Prairie Schooner, Red Rock Review, and numerous other publications.

Jackie Leishman is a Los Angeles based artist. She received her MFA from the Academy of Art in San Francisco. Originally trained as a photographer, she now works in collage.  Using both traditional and non-traditional materials, including fragments of old projects, Leishman explores the dichotomies she witnesses. She has shown her work nationally, won awards, and taught fine art at universities in Utah and California. Her work is beloved by designers such as Leanne Ford and Emily Henderson. She recently exhibited in Downtown LA and had a solo show at Granary Arts, titled “Heaving into Mountains.”