​​​​​'Did you hear about the Lavinia bombing?’ my nephew, Pathmasri, asked. ‘It was just on the wireless.’ We walked to the Saraswathi Lodge on Galle Road. It was jam packed with folks hunched over plates, massaging red rice and curry into clumps. I ordered a short eat that grew cold on my plate while Pathmasri devoured a curry. The waiter brought glasses of tea and went away. For the next twenty minutes I found myself talking

Your mother doesn’t want me to speak of these things, but life is a mere soap bubble, ready to burst at any moment. After our father died, Great Uncle was my hero. Each day I hurried to Maho Junction’s jangle, thunder, and whistle and Uncle’s Victorian office of log books of headed columns, brown paper envelopes pegged to notice boards and whirring fans. And the signs with ‘Nagollagama,’ ‘Ambanpola,’ ‘up train approaching’ or ‘up train online’ to avoid headlong crashes on the single track. The office, next to the village’s only garden and Buddha shrine, was the most modern building in town.

Maho was on the map because of the Junction, otherwise our wooden stores and shabby huts would have been a forgotten backwater. It handled two-dozen trains each day. A wind-up telephone rang when a train was leaving adjacent stations. The signalman removed the thick bronze tablet from its frame and slipped it into a leather pouch on a stuffed hoop (Tyer’s Patent Application). As the train galloped in, he threw it like a lion tamer. The fireman leant down to catch it as the train ground to a halt. The driver was forbidden to leave without receiving and delivering a tablet, proof no other driver was on that stretch of rail. As offloading post began, passengers crowded to get on and sellers of warri, apples or water made their way along the platform.

In a spotless white shirt and trousers, navy cap, and silver badge, Great Uncle was the master of sobriety. No other job, except the ticket seller’s at Yapahuwa’s tiny museum, was more respected. The rest of the village grew rice, sold roti or tarried in three-wheelers for passengers. They chewed puwak or drank tea, crouched at the roadside, dreaming of better things, but Great Uncle had connections with the outside world; supplies, post, and people.

He lived with us and held forth behind closed doors. An underground activist in his youth, he griped, “Once, we soared like eagles. Now, we scratch dirt like chickens.” He said the only thing the Britishers left us was the train system and divide and rule: “We elevated division to sublime heights and ridiculed the rule of law.” It was from him I learned of the first national strike or of Bandaranaike’s platform of ‘two languages, one nation,’ later dropped for the Sinhalese Only Law. I admired my Uncle but resented his bitterness.

​​​​​​I was your age when he died. My consolation was his job. For ten years, I was a model stationmaster living up to his impeccable standards. Till the bombing between Maho and Ambanpola. But I’d been too free with opinions. The Dharma insists all men should find escape from suffering, not cause more; but to suggest as much made one a criminal. Friends had limbs broken or were disappeared for similar views. My position as stationmaster protected me until the bombing. I wasn’t officially blamed, just quietly demoted to Wellawatte, a suburb of Colombo back then.

You don’t remember the anti-Tamil riots, India’s occupation, or Muslim and Tamil persecution, Pathmasri. By the time you were born the moment had passed, and Sri Lanka had turned in on itself and was addicted to war. Now they’re crushing the rebels, city by city, flashed from news maps like Monopoly locations bought with paper lives; Elephant Pass, Kilinochchi, Mallavi. Our boys, lured by twenty-five thousand rupees a month, march north and are sent back in coffins. Graveyards fill with camouflage gravestones framed with plastic tusks.

President Rajapaksa, with his kurakkan-farmer’s scarf, has manipulated distrust into hatred. Buddhists have trampled their former Tamil taskmasters like an elephant in must. No one dares ask what will happen after the rape, torture, and mayhem. Or how the army will distinguish Tigers from Tamils. How will we reunite our ‘Democratic Socialist Republic’?  Your teachers, the television, papers, even your mother have filled your head with lies to protect you, the safest path being ignorance. But I’m asking you now to think outside all you know. Consider the basic paradox, Pathmasri, how can war correlate with Buddhist precepts?

​​​​​​​Last week, I’d gone to drink coconut milk at the corner. Sitting on the broken wall I stared across the slip of sand at boys, leaping and diving in the surf. A fellow limped up to the stand and asked for thambli. Retying his lunghi around his slight hips and wiping sweat from his brow, he squatted. His high forehead, scarred cheek and glittering eyes seemed familiar.​​​​​​​

​​​​​​​His yeasty breath filled the silence between us.

​​​​​​​He made a vague gesture in the direction of Bambalapitiya that could have meant Station Road, Wellawatte or Colombo at large.

​​​​​​​“I was born in Maho,” I said and his eyes jolted into focus, “in Kurunegala. But this is home now, here, on this corner. I’ve been stationmaster at Wellawatte nine years.”

​​​​​​​“Nine years, Maho Junction,” he echoed as if these words meant something else. “Why do you wish to speak with a poor Tamil like me, Stationmaster of Maho Junction?” he whispered, lifting his charcoal eyes to meet mine.

​​​​​​​Providence had brought us to this crossroad and he was impelled to tell me his story. Lakshman was born in Vavuniya District in a tiny village, I forget which. He had no connections and never finished school. His parents were rice packers, spreading grain with their paddles on a cement floor to dry in the sun and sweeping it with coconut hair brooms into hoppers that sifted and polished. Ahead of him lay servitude. Homegrown Tamil boys are like peppercorn trees;  deep-rooted but their green berries are left to shrivel and blacken. Lakshman came of age in the heat of civil war that separated our communities like lime and coconut oil. When the Liberation Tigers of Tamil Eelam came recruiting, he signed up.

​​​​​​​When he started dropping dates and times of various bombings, my skin crawled. His words were like flares guiding me toward the truth. He’d got down at Maho that evening, nine years before, from the five twenty-two, empty handed, dressed like an office worker. I noticed him; something about the way he moved, slick as a green pit viper, made me lift the receiver to alert the soldiers. But he was gone already, crossing the rails, slipping away toward the bus station.

​​​​​​​Lakshman meant to return north directly. But he changed his mind when he saw a young boy waving goodbye to the Maho stationmaster; that was you, Pathmasri, bidding me goodbye. You reminded him of his brother, killed years before in Black July’s pogroms. Instead of going home, he boarded a bus heading in the same direction as the train, to Ambanpola. The bus drove on the road parallel to the railway line; he heard the explosion roar. When the bus caught up with the derailed train, the driver pulled over and everyone got out. The carriage was ripped open, lumps of flesh everywhere. Lakshman saw it. It changed him; he began to drink and the Tigers used him less and less.

​​​​​​​Lakshman told me about signing up in eighty-five, after the Anuradhapura massacre. Of the Tigers’ hundred and seventy suicide attacks. Of their lowest moment, Doctor Thiranagama, and their biggest mistake, Rajiv Gandhi. The violence dragged on, a brutality here, an atrocity there. A life for two...and three more for the two. The fruit of his labours was this war; those he’d fought for were without homes, food, water, hospitals or schools. We should have given them Eelam, that little slice of autonomy they fought so hard for, but it was too late, much too late.​​​​​​​​​​​​​​ Lakshman hinted at a last job ahead. Perhaps he meant me to challenge him. But as I watched the waves of the Indian Ocean roll towards us I wanted nothing else but to sink beneath them. We are told from birth that we’re helpless and eventually experience confirms it is so.

​​​​​​​His lean, spare figure limped off, along the shore. I could have run after him, called for help, had him arrested. I did nothing. Men like Lakshman and I are supposed to be enemies. The rice polisher’s son the adversary of the rice picker’s. But we’re grains of the same stalk, watered by the same rains, blighted by the same plague. Violence is the enemy; it has a life of its own.

​​​​​​​Last week there was a suicide bombing on the bus bound for Maradana. Another in Pettah market some five days ago. And now Lavinia. I don’t know which was Lakshman’s. Perhaps all three. I too have blood on my hands. We all do; rebels, soldiers, police, politicians, even bystanders. Even you. Perhaps you will turn me in; tonight, when you can’t sleep, it will seem the right thing to do. They’ll pick you up anyway, sooner or later. Silence won’t protect you from their blows. Nor ignorance. They pull us all in, in the end: innocent or guilty. When they start the beatings, you invent your own crimes.

I fell silent. Saraswathi Lodge was empty now. As we walked back to the station, Pathmasri’s gaze was firmly fixed on the small space his next step would take him to. He never lifted his eyes to meet mine even as I boarded my train. When I’m arrested, the day after tomorrow, I will not know if it was Pathmasri who betrayed me. Or Lakshman. Or a random official with a hunch. 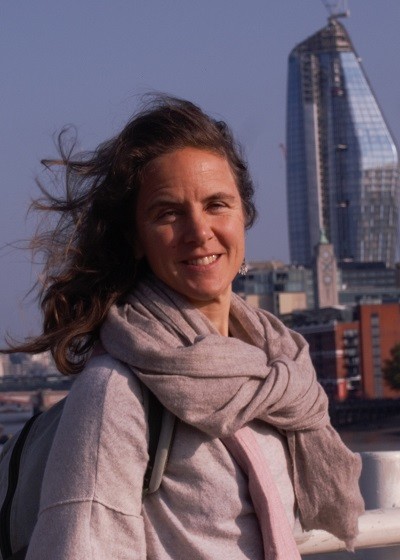 Cassandra Passarelli, a nomad at heart, has just returned from wandering from Volgograd through Kalmykia to Astrakhan. Cassandra ran a bakery for ten years, managed a charity, has sub-edited and set up a library foundation for children in Guatemala. She studied literature at the University of London, received a creative writing masters at the University of Edinburgh and is currently pursuing a PhD on the sacred and mundane in the short story from a Zen Buddhist perspective at the University of Exeter. She lives in Devon, England with her daughter.

Five of Cassandra’s stories were included in an Arachne Press anthology, Five by Five. Others have been published by The Carolina Quarterly, Ambit, MIR and Chicago Quarterly Review. She won the Traverse Theater’s Debut Author Prize and was shortlisted for Cinnamon, Wells Festival, Cadenza, R Rofihe and Aesthetica prizes and Eyewear’s 2018 Beverly Prize. Her novella, Greybill, won the Books for Borges Prize.