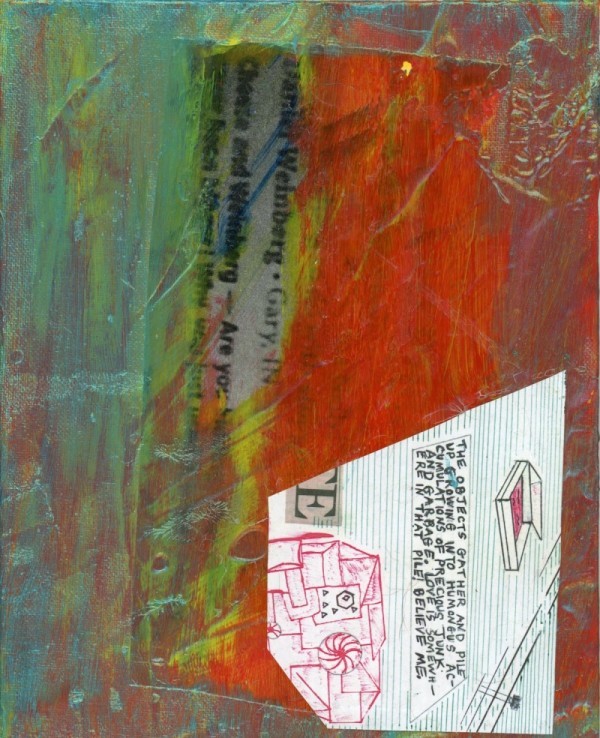 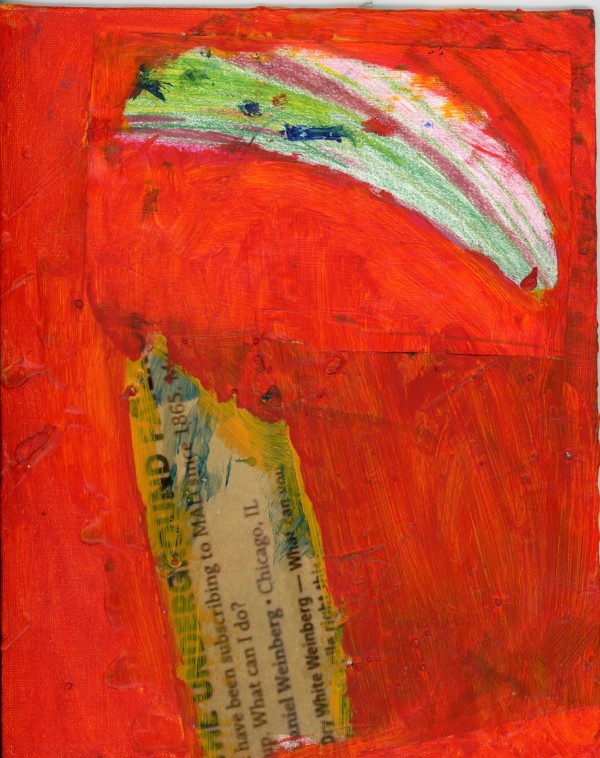 Daniel Weinberg: My 2 pieces are collaborations with my son, Chico Feinstein, who is a Democratic campaign consultant, musician, and SoundCloud artist. "The MAD Letter" shows part of a letter I wrote to MAD that MAD published in April 2015 and got me some swag like books, toys, etc. Politics and MAD do not usually go together but I always try. MAD can be silly and immature at times but MAD is a typical American liberal magazine never really bothering the ruling class. Chico Feinstein is more of a liberal.

"The Objects" has a portion of my MAD letter from December 2010 and also has a fairly typical schizophrenic statement about stuff that can pile up and overwhelm us when we are not vigilant like the USA accumulating much oil and ignoring the consequences. I had mental problems for a long time as this statement shows.

Both pieces are made more attractive by Feinstein's acrylic paints and creative rendering of the words. Feinstein amplifies the words and makes the statements seem to be important as a presidential speech. I sometimes say that I do "word art" or "visual poetry" which is evident in my pieces on my website.  Politics is always lurking in the background.  I had a total of five letters published in MAD Magazine from 2010 to 2017 which must be some kind of record. I tried to enter that stat in the Guiness Book of World Records but they never responded.

My art speaks of the natural divisions between and among peoples of the world. I have been to Israel and Germany and seen how this country is so large and giving and at the same time can be constraining. I hope to show people alternative roads to take in their journeys near and far.

Chico Feinstein’s work is study of dichotomy.  His dual heritage as a Latino of Jewish decent, his dual passion for politics and art, and his dual nature as a pragmatist and an anarchist, invite audiences to explore their own duality. Attachment, Jealousy, and rage (AJR) are expressed through the abandon of abstract painting, while the unconscious is represented in agressive soundscapes and music. The brilliant colors of Chico’s Mexican heratige are juxtaposed with the reserved pragmatism of his European ancestors; resulting in a visceral mixture of feeling, culture, and consciousness. Chico’s work is singular, but uniquely American.


Daniel Weinberg is a pen and ink and colored pencil Outsider wordartist. He occasionally collaborates with fellow artist Chico Feinstein. He has had a number of group shows and two solo shows in the Chicago area. Subjects such as politics, social forces, and people’s attitudes are his main interests. To view more of his art, visit artpal.com and search for “weinbergsart.”

Chico Feinstein is an artist, and a musician on SoundCloud.