I want to put us in communion with other bearded women.

Your mom has a beard, will you end up like that? Brett Asher asked me on the first day of second grade. I felt the urge to cover myself. I toyed with the zipper of my teal sweatshirt, pulling it up to my neck.

From as early as seven or eight I was aware of the obligation women have to shave—to become smoother and touchable. I already had hair on my shins. I sometimes pulled out a strand or two as an exercise of maturity or curiosity. The white root on the end intrigued me.

I don’t remember exactly what I said after that, but I know I made a joke about you. I felt guilty about it after school when you set two bowls of stew on the counter for Billy and I. Red potatoes, cubed beef, thick carrots, onions. I dipped a potato roll in the broth.

Is there a part of a girl’s body that should be allowed to grow? To be wild?

That night I inspected my own face in the mirror, analyzing each follicle on my chin and cheeks. There was, of course, hair: soft and light like the fur of a newborn animal, mouse, downy corn husk, the gentle side of the Velcro.

There was always evidence: foam in the downstairs bathroom sink. The scars across her lip and cheeks. The shreds of toilet paper she’d stick to her face when she was done. We never spoke of it. We’ve still never spoken of it.

Darwin and his contemporaries have several ideas about why women might grow beards. Ambling, on the hunt, they traced their way through every US city where they were sure to find these women on display. A glass box. A medicine cabinet to stand in front of. The altar where my mother washed her face every Sunday before church. Accompanied by the light scent of lavender and lemon verbena. She brushed my long, knotted hair while I sat at the end of the kitchen table.

I am 22 and only one month ago did I learn that we both have PCOS (Polycystic Ovarian Syndrome), one of the prime markers of the disorder being the growth of facial hair in females from a young age. I wonder how many other bearded women have had it too. I wonder how many of them didn’t have words to articulate the pounding fists beneath their abdomens. How many wondered what could be wrong with them—why god gave them beards.

Often times people with PCOS will have irregular cycles, missing months and then having periods that can’t find an ending. The sentence. A run-on.

When I was younger, I never had the courage to ask you if there was something wrong with me. I didn’t talk about it. Like most aspects of each other’s lives, we have somehow inhabited the same space without speaking of it.

I don’t tell people that we’re both writers.

You taught me where we keep the green plastic squares. How to hide them in your sleeves so the men in the house don’t notice us. How to ask for more without asking for more. How to wrap yourself in toilet paper. Wash the razors out in the sink, leave the dull heads in the waste can by the toilet.

I still feel guilty sometimes for not being your daughter.

There were two instances where we painted each other’s nails. 1) You made mine look like watermelons, you had worked all day and in the dim light of the kitchen still found time to paint my small pink fingernails. 2) I was too young for nail polish and we spilled a primrose color all over the stones of the back porch. I learned what nail polish remover was and that I hated the smell.

One of the prime subjects studied by these biologists at the turn of the century was named Viola. A sketch of her from an 1877 book entitled Archives of Dermatology depicts a regally dressed woman with a full-on beard. It’s lush and its curls mimic the vitality of the spirals of brown hair pouring from her head. The beard goes past the scope of the portrait, out of frame. Her report reads: At about the age of ten the hair of the face began to grow more vigorously, the cheeks, chin and upper portion of neck showing an abundant production. I find magic in this. I want to touch it. Is that weird?

It has been a long time since I pressed my forehead up against your face. This is not something grown men do with their mothers. Should it be? I’m thinking of you holding me in the tired rocking chair that still waits in my old bedroom. The back of the chair has an inscription that reads “On the birth of my granddaughter, Sarah.”

For good reason, not all transgender people feel comfortable letting you know their birth names. I do this as an act of intimacy and because that’s what my mother still calls me.

I love these bearded women in the sketches because, despite being cataloged like animals, they have found a way to make a living out of their ability to grow hair. Does anyone do that anymore?

Another image from an archive of PT Barnum’s Circus depicts Annie Jones. The poster reads “La Veritable Femme A Barbe” The True Bearded Woman. There have existed very few women able to wear a beard. I want to know if this woman was proud of her beard. I think I wonder this because of how much you resent your own. Shave close to the skin. Shave on Sundays. Before work.

A beard means something different for me now.

Even before I started taking testosterone I could grow one. It became something I could hold onto. A fragment of stereotypical manhood. I know that I needed to think of my facial hair like that back then, but, I want to think of The Beard differently now. I want to think of beards as motherly, for us.

Annie Jones, from the Circus Poster, is most well known for being an advocate for the “Freaks” section of Barnum’s Circus. I feel awful having to type out “Freaks” because she spent the majority of her professional career trying to eliminate that word from the circus world. I see her sitting in the trailers of the traveling shows, maybe, perhaps telling a story to the rest of the group. I imagine her as a writer like us. A mother.

If I Google image search “Bearded Women” the first search suggestion is “PCOS.” These stories are interlocked.

Only this past summer did I dig more into what PCOS even really is. The body making alien—distant. Surreal. I think of our ovaries like two moons. The medical images of polycystic ovaries covered in cysts resemble the faces of planets. I prefer to think of them like this. It makes them less malicious, less impending.

I attended a transgender health conference this past summer and I was in a session about hysterectomies. All I could think about was you. I wanted you to sit with me. I wanted you to tell me that I would be okay even if I took out the parts of our bodies that we share.

I see us walking on the surface of these moons.

¾ of transmasculine people have PCOS.

The physician tossed out the statistic in a long spew of others. I wrote it on my thigh in ball point pen. ¾.

I wanted to remember to tell the ¾ths to you. As if, now, maybe now, you could understand that there was something chemical to it.

But then, of course, there’s you. There’s all the bearded women. If not chemical or medical, then what is a body?

You know the gravel road? The one where last year they planted soybeans and the year before they planted wheat? The road we would walk down when I was in middle school and still had a round face and long brown hair with knots in the back. This is now the surface of a new planet.

There will come a point when both of us will have to have our ovaries removed. PCOS can often evolve into cancer—the cysts can become painful, volcanic. When the doctors peer in at them I look away. I don’t let them show me images.

I see them as mauve in color. Gentle. Can we now, though, can we now just take a moment to trek across them while we still have them in our bodies?

I don’t bleed anymore and occasionally I want to. I’m not supposed to say that as a man becoming a man.

I’m not asking you to grow out your hair. No one could ask you to do that.

I’m asking you to look up the images of bearded women and call me after. Call me when you’re driving home from work. You never call me. I should call you. I know. I know I should.

Will you search for them then?

No, not just on the internet. I mean really look for them.

On mornings like this when none of my housemates are home and I just have a mirror, the hair on my face feels like a relic of my girlhood.

Would you have braided mine?

Could we have traveled with a circus? A mother and daughter.

In all of Darwin’s reports he hypothesizes these women as the “missing link.”

This is obviously dehumanizing, but, somehow reading it doesn’t faze me because I already know that’s how society sees women with beards.

A boy I dated in high school once said, after kissing me and brushing up against the prickly hair on my lip,

You’re going to take care of that right?

I’m speaking up now, nearly a decade later. Years of dabbing blood off my face. Years of watching you put bandaids on your chin, your neck.

I’m going to take care of us.

Now I know that the missing link is not one body, but the distance between them.

I should call you. I should. 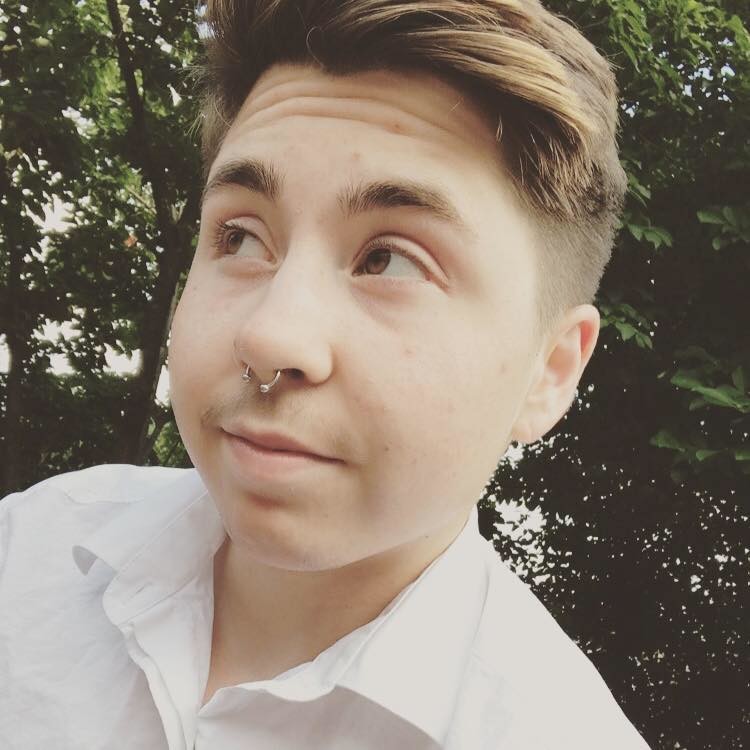 Robin Gow has recently been published in POETRY, About A Place Journal, and Tilde. He is a graduate student at Adelphi University pursuing an MFA in Creative Writing. He runs two poetry blogs and served as the production editor of the Lantern literary magazine for four years. He is an out and proud bisexual transgender man passionate about LGBT issues. He loves poetry that lilts in and out of reality and his queerness is also the central axis of his work. He’s inspired by trans and gender non-conforming poets like Eileen Myles and Alok Vaid-Menon.