Ghosts on the Coast

All along the coast this summer, as I traveled to talk to people and communities facing sea level rise, I have seen them. After hurricane Mathew I rescued a fish from a puddle in Charleston, swept in over the sea wall, now returned to the sea. I have heard of living shorelines, green infrastructure, raised roads, and scuppers on storm drains to let water out but not in. I encountered alligators and sea turtles, ancient species, mostly unaffected, for now. Sunny day flooding, in Norfolk, beach erosion in Nag’s Head, remnants of vanished cultures on the Georgia isles, but what I am most struck by are the trees.

In my mind’s eye they can still be conjured, gray and weathered, spectral, wraithlike. “Boneyard beaches” is one term I have heard for stands like these on the coast; “ghost forests” is another. The skeletons stand steadfastly upright in the sand, pretending to be the trees they once were. Their denuded forms give an odd aspect to the beach. This is no place to throw down a towel. No place to lather your body in lotion. Instead of beach blanket bingo, the atmosphere is funereal.

The trees were killed where they stood by the constantly eroding and unsheltered shore, by the salt air blasting them, the soil degrading into silicate, the briny water drowning roots, the tide and sea rising, rising. Bleached by sun, they look like giant claws, reaching up out of some villainous ocean or marooned vessel.

Humans could move further inland. Pack up and leave. But trees can’t run from impending doom, which is perhaps why they make such enduring symbols in literature. Think of the oak tree outside of Boo Radley’s house, repository for small gifts, symbol of friendship, thriving through adversity. Or that tree that grows in Brooklyn, invasive ailanthus, sprouting upward as if parallel to young Francie Nolan’s impoverished circumstances.

But these ghost trees seem to signify no such hopefulness. If they are a tree representing knowledge, some sinfully delicious fruit, they are a portent of things to come, the ghosts of climate change.

Of course, dead trees, in every stage of decay, are vital to the living. So we might not mourn their passing. Birds, bats, and raccoons live in the crevices and hollows. Squirrels climb inside for shelter and store food. Insects eat the moldering wood. From death comes life right? 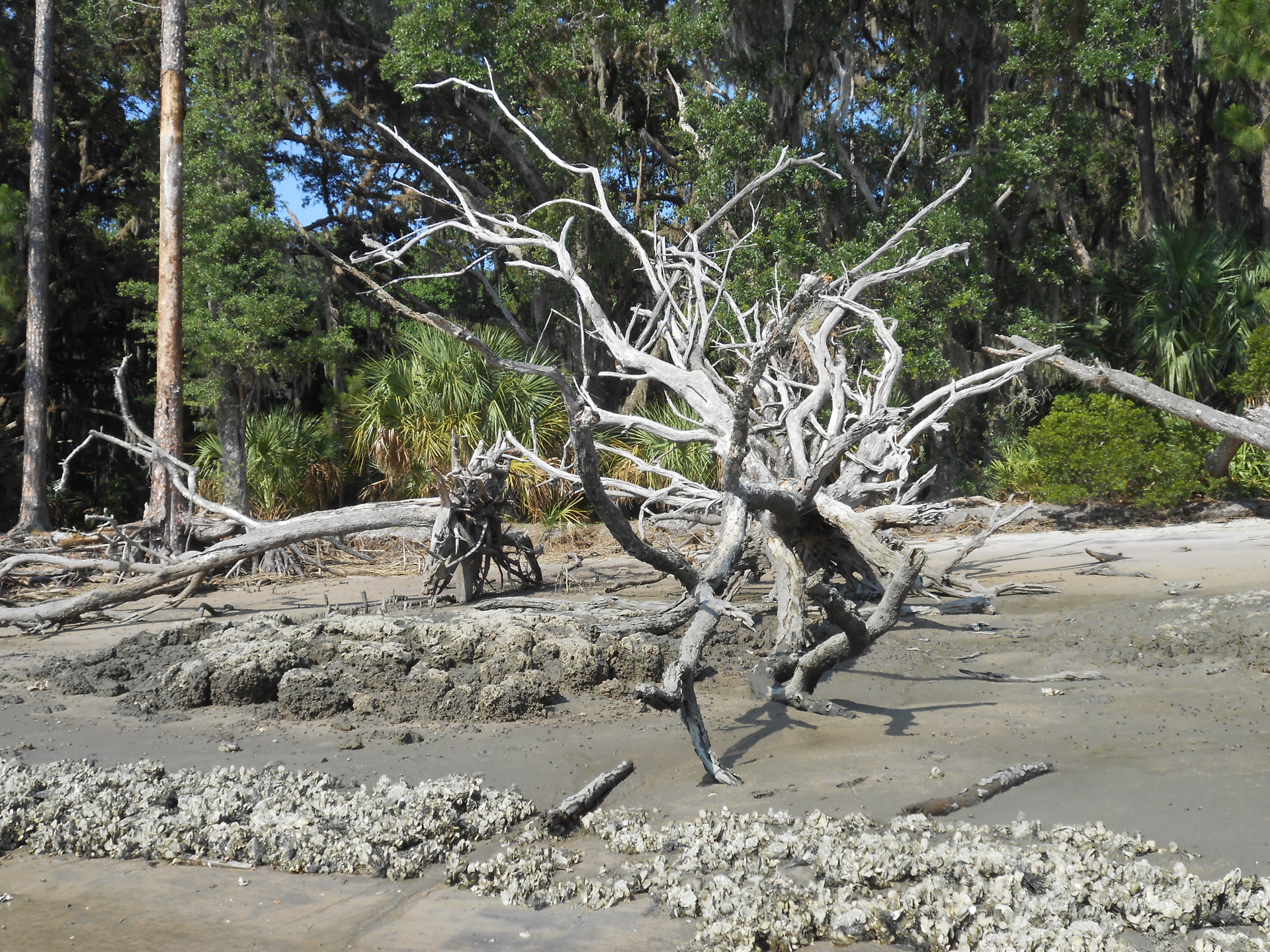 Once infected with salinity, these ghost forests fail to produce new saplings. A healthy forest is like a family, where plants and animals with shared interests coexist. They help each other become safe, secure, and strong. The tall trees are the adults, providing shade and shelter for the younger ones. Pines, sweet gums, and maples grow in these forests, but the granddaddies are the live oaks and cypress. They live for hundreds of years, and the Angel Oak at John’s Island in South Carolina is believed to be anywhere from 500 to 1500 years old.

The Angel Oak is a species of tree native to the low country. When I visited it, I was stunned at the sheer massiveness of the base, more than 25 feet with some 17,000 square feet of canopy cover under its branches. I crept around under the spidery limbs, my imagination wandering. In A Southern Journey: A Return to the Civil Rights Movement, Charleston resident Bill Saunders told poet Tom Dent the tree is said to be a symbol of survival, bending but not breaking after storms. “When the sun comes out again after the storm, the Angel Oak is still there, standing majestic no matter how many limbs were taken.”

The oak derives its name from Justus Angel, a slave owner. Local folklore tells stories of ghosts of former slaves appearing as angels around the tree. It is believed that some were lynched there, the site of a former plantation. There is an indescribable energy to trees this big, as if spirits surround them.

In her Ghosts and Legends of Charleston, Denise Roffe interviewed a woman descended from the slaves who toiled on the island’s plantations. She recounted the legends of the tree, including that it was once home to huge birds (likely vultures) who fed on the bodies of lynched slaves. The old woman continued saying that many people were buried under the tree including Native Americans who met under its shady branches. She stated that these spirits still gather around the oak and that they also work to protect the tree.

The dead stay with us, this is much we know. Our ghosts reflect the contours of our anxieties, the nature of our fears, and possibly our hopes for return. Ghosts haunt us because we want to believe in an afterlife, for death to mean something. For what they tell us about changes to the coast, tree ghosts should make us shudder.

We also know that trees communicate. They talk through underground mycelial networks. Threatened with a parasite, trees can turn bitter. And they can withhold nuts until animal populations are reduced. They know how much soil is available to them, and where to stretch their roots. Trees, like animals, can adapt. But not fast enough to keep pace with a rising sea. And while we suspect that animals can sense grief, can trees mourn the dead?

If they can, they are full of it right now, as are many inhabitants of the coast. Among the many adaptations we may have to make as the sea rises, in addition to the physical ones, is coping with and recognizing our grief. 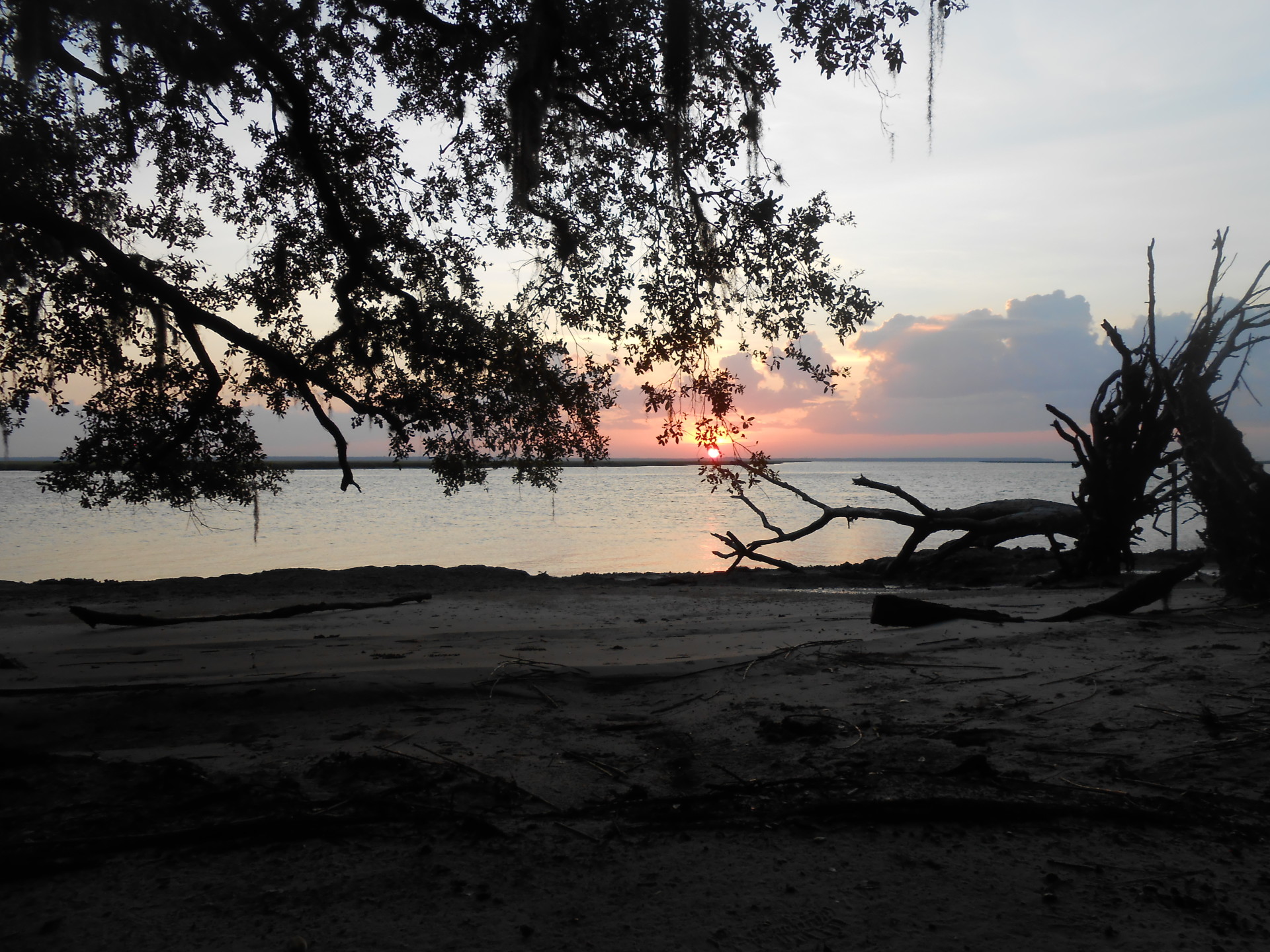 Grieving brings people together, to remember and reflect, yes, but also to forge ahead and solve problems. In evolutionary terms, grief for a missing partner led to a search and a reunification, living to see another day, where resources and nurturing would once again be shared. The precursor of grief is love, the positive emotions experienced even before grief comes into play. That adaptive trait is basically an understanding of how our mutual dependence and cooperation increases our chance for survival.

In my lifetime I have lost some important trees. The ash outside my bedroom window that I would stare up into as a boy—emerald ash borer—gone. The hemlocks at the first home I purchased, shading the back deck and swing-set—wooly adelgid—dying. Because of these losses I am tempted, on walks when feeling particularly spry, to want to thank the trees. For the shade they provide. The oxygen they give. The soil they hold in. But that would be ridiculous, right? Thank a partner for the good work they do? The love for trees, and the corresponding grief for those lost, taps into this feeling of kinship: their demise could signal something ominous for us.

On Cumberland Island National Seashore, at the Carolina Coast, I get close to probably a live oak, perhaps a pine, reach out a cautious hand, as if touching a body laid to rest. The smooth, hard texture touches back somewhere under the skin. I look up into the bare canopy, still spectacular in shape and structure, and imagine it as a sapling, maybe a hundred years ago or more, on a much different shore. To defeat these ghosts, and the larger problem they signify, you must first understand how they are created. You must be able to decipher between what is natural and what is man-made, to tease out hoax from truth, and be willing to wade in the muck and mire where these ghosts linger.

We walk in a healthy woods to smell the spring rain, look for the burst of wild color, bathe in cool air and damp shade. But all along the coast, and places further inland decimated by drought, or bark beetle, or both, these dead trees show symptoms of a larger planetary illness.  They intrude on our notions of the pastoral, telling a macabre story of a species who fails to see the forest for the trees. 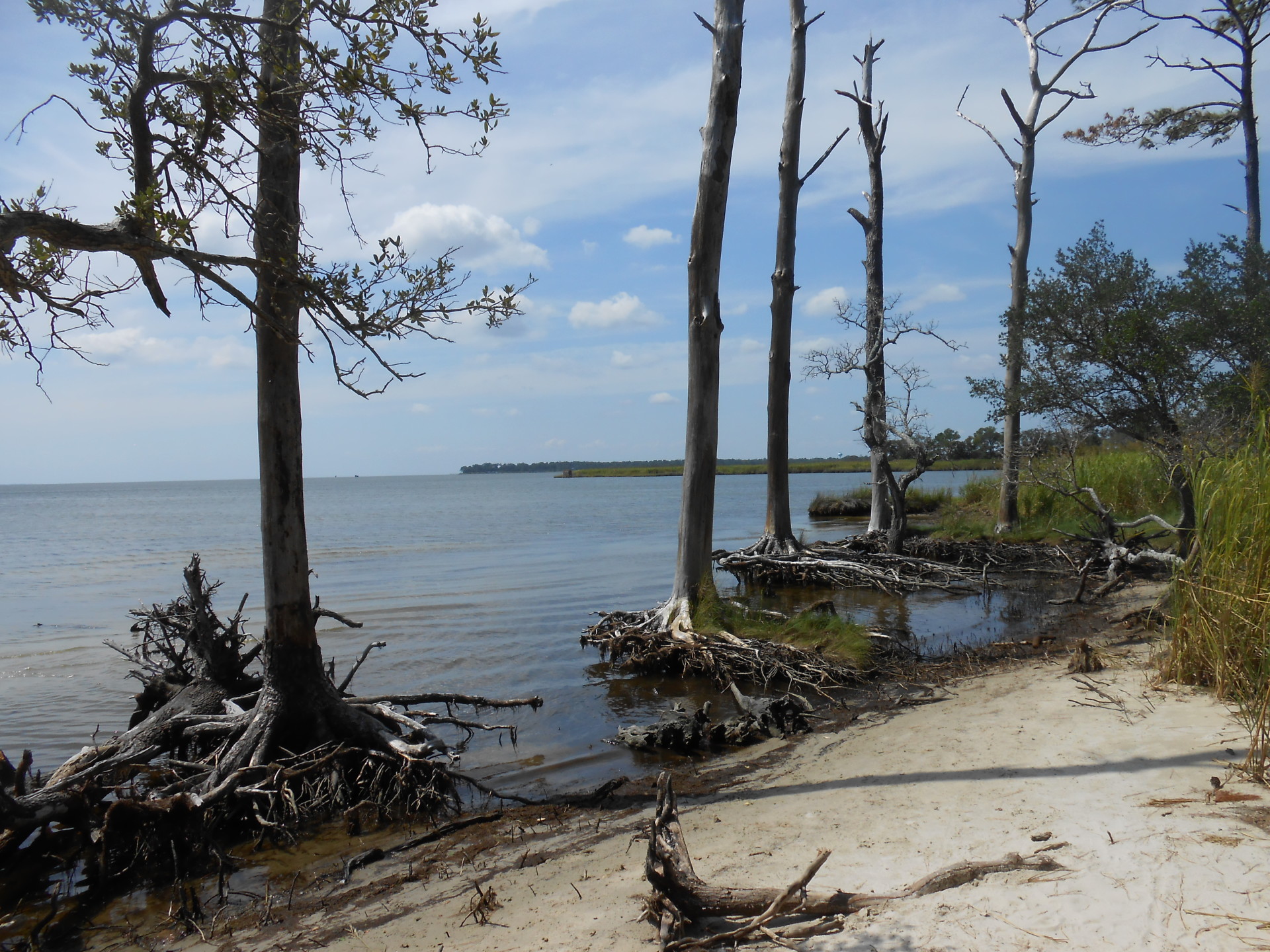 Rick Van Noy is the author of Surveying the Interior: Literary Cartographers and the Sense of Place and A Natural Sense of Wonder: Connecting Kids with Nature Through the Seasons. Van Noy is a Professor of English at Radford University. He is working on a book about climate change in the Southeast.